2 window washers are happy to be back on solid ground

ROCHESTER, N.Y. (WHEC) — Two window washers are happy to be back on solid ground after their motorized platform got stuck halfway down the side of the Innovation Square Building on Friday.

After being stuck 160 feet above the ground for about three hours, firefighters had to go up and rescue them.

"We were just doing our normal thing at work, and the rig stopped working," said Window Washer Joseph Russo. Both he and Nicholas Kitrinos now have one heck of a story to tell after they were rescued by Rochester firefighters. They waited patiently as their rescuers geared up.

"Instead of panicking we just kind of chilled out, and then we realized it got serious when the fire department started to pull up. Our guy couldn’t fix the rig," said Russo.

A few curious onlookers watched the rescue operation. We asked, "what was going through their minds as they waited?" 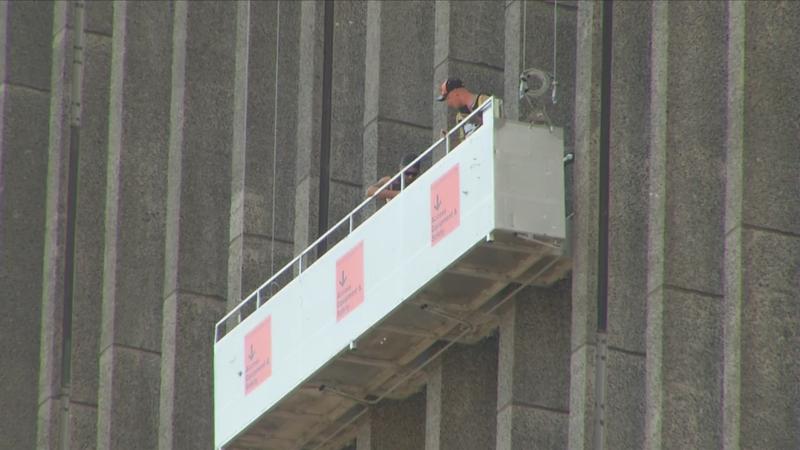 "I wanted some water. I didn’t have any water, and my mouth was so dry I could barely talk," said Russo.

Rochester Fire Department Captain David Abdoch talked to us about the rescue.

"We came up with a plan of attack. We’re able to go inside, cut a window open, and tie off the rescuers. Secure the basket, and we were able to get two of the male individuals into the apartment safely," said Abdoch.

Rescuing Russo, and Kitrinos looks easy, but Abdoch says it was a serious job.

"You make a mistake, it could go wrong for the fire department or the two men who were in the basket. So we make sure we train on instances like this because it’s more than just what we do as fight fires, and EMS."

Russo, and Kitrinos took it in stride.

Russo: "We didn’t know how they were going to rescue us so when they started cutting the window, we’re like oh that’s easy.

Kitrinos: "We were hoping for a helicopter."

Russo: "Yeah we wanted a helicopter."

Russo also had this to say after their ordeal:

"We’re down now. We’re happy, ready to go home on a Friday. You know," said Russo.

The Rochester Fire Department says no one was hurt, and the window that was cut is being replaced.