ROCHESTER, N.Y. (WHEC) — When he’s not working as a systems engineer at Xerox, DaTwan Dixon pours his heart, his time, and his computer expertise into volunteering as a mentor with the X-Cats Robotics Team at his alma mater, Wilson Magnet High School, and he’s been doing it for nearly two decades.

Yet in the hour that News10NBC spent talking with Dixon and learning about his work with the team, the subject of robots came up only briefly. In fact, the team’s motto, which Dixon helped create is “we don’t just build robots… we build people,” and it’s clear that his work is about so much more than robots.

“One of my favorite sayings is ‘it takes a village to raise a child,’” Dixon said. “And for some reason, whatever that reason is, I’m very passionate about helping kids.”

It’s that passion that has instilled a sense of community in hundreds of students over the years and helped them reach their full potential. Every year before the team starts to build their robot for competition, Dixon makes a point of giving back to the community first.

”That’s one of my favorite things to do on the team,” Dixon said. “I’m the leader of community service. So we go to Foodlink to volunteer there, we do Open Door Mission, we’ve gone to a place called Toys For Tots, they’re fantastic, we also go to Saint Ann’s Community.” 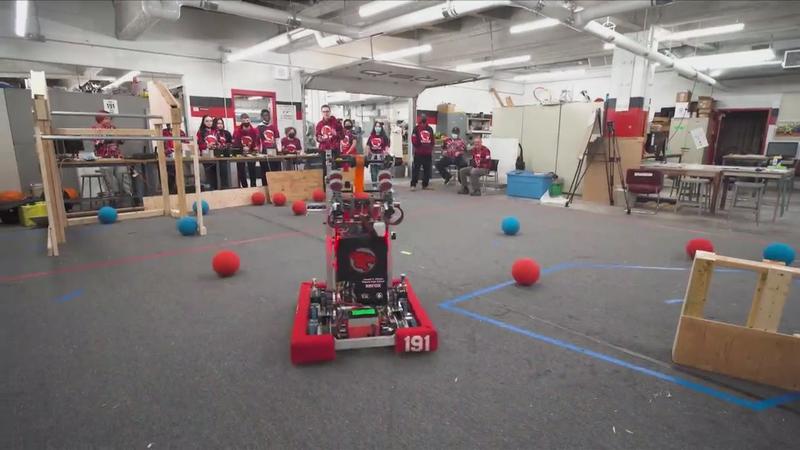 Dixon’s dedication to community service trickles down to the students he mentors on the X-Cats.

”It’s not just that he has like the volunteering spirit,” said former team member Ezana Kalekristos. “He brings together everybody else around him to also volunteer.” Kalekristos, now a student at Rochester Institute of Technology, goes on to say ”I don’t know where we’d be at without him, to be honest.”

Students on the team say he creates unique connections with each of them, and helps them harness their strengths and build confidence through his leadership.

”DaTwan is one of the most heartfelt, caring people I have ever met,” said former X-Cats team member Aidan Sciortino, who went on to pursue a STEM career and now holds a position with a tech start-up. ”In terms of giving of his own time, DaTwan reigns supreme. I mean, he really just dedicates so much time, so much energy to this team, to our mission.”

The admiration is mutual.

”So, Aidan, you only have to talk to him for a few minutes to realize he’s a genius,” said Dixon. ”Aidan just immersed himself into programming and he absolutely loves it. So he got a full ride to U of R, now he’s in California with this job that is absolutely amazing.”

Sciortino attributes much of his success to the time he spent on the X-Cats team under Dixon’s leadership.

Helping kids find their voice and build their confidence is perhaps the most important part of Dixon’s work with the team, but it’s also important to him to foster a safe environment for students who face unthinkable challenges at home.

Dixon recalls one day when a student arrived at a team meeting, completed the activities for the day without issue, then asked Dixon for a ride home. On the ride home, the student shared that he was having a hard day. When Dixon asked about it, the student said that earlier in the day he had witnessed a family member get shot and killed in front of his home. And he still made it to X-Cats.

”These are the challenges that some of the students are faced with,” Dixon said. “And when I say they have a safe place to come to and just get things off their mind when they’re on the robotics team, they truly do.”

Vicki Robertson nominated DaTwan for an ESL Jefferson Award. They met when her son was on the team, and now she volunteers her time to help out.

”He keeps us focused on the kids,” Robertson said. “Some of us mentors we get really excited by the game or building the robot or whatever and DaTwan always brings us back to the kids, and that’s why we’re there.”

On top of volunteering with the X-Cats, Dixon also volunteers with the youth outreach program at his church. His tireless and profound dedication to supporting kids comes as second nature.

”I remember early on… I couldn’t believe that other people weren’t doing community service activities,” said Dixon. “So I’m like, it should be an obligation, not a choice. So that’s one of the things I’ve always believed in, something that my mother, my grandmother instilled in me, so I continue to try to give back.”

To learn more about the X-Cats Robotics and to donate to the team, visit their website.

The 2022 ESL Jefferson Awards, honoring volunteerism throughout the Rochester region.