GREECE, N.Y. (WHEC) – At just nine years old, Santii Patel is already making an immeasurable impact on her community. Because of her kindness, ambition, and commitment to inclusivity, a fully-accessible playground now exists in Greece.

It all started three years ago, when Santii was playing on a playground and something caught her eye.

“When I was six I was at a playground and I saw a little girl and she couldn’t play with anything on the playground, so I went to my mom and asked her why?” Santii said. “And she said it just wasn’t made for her.”

It didn’t sit well with Santii when she learned that none of the equipment on the playground was accessible for many children with disabilities, so she did something few adults would dare to do: she took action.

“As adults we see it, but we don’t really question it,” said Rebecca Jason, Santii’s mom. “It’s just kind of like, unfortunately, there’s not much that we can do, and we just kind of think… that’s the way it is. But for her to stand up and say it wasn’t acceptable and she wanted to change it and do something was kind of inspiring.” 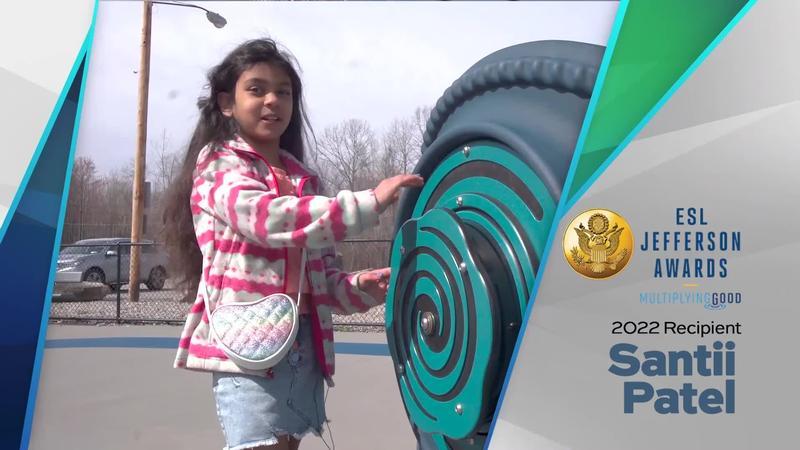 Like a lot of kids, Santii decided to sell lemonade and hot chocolate in her neighborhood to raise money. Unlike other kids, her plan was to put all of her earnings toward building a single wheelchair-accessible swing. On top of selling hot cocoa and lemonade, Santii collected bags and bags of bottles and cans to raise money.

“It’s kind of taken us by surprise,” Rebecca said. “When we first started there was like two or three people that would come, just neighbors, then her school resource officer found out about her cocoa stands and made flyers and kind of made it a big deal… and we had the fire departments, ambulance, the news coming out, and that’s kind of when it took off and from there, more and more people heard about it and her funds just grew bigger and bigger.”

With help from generous donors, Santii was able to raise $10,000 for accessible playground equipment.

As her funds grew bigger, so did her vision. When the Town of Greece got word of Santii’s plan, her dream went from building a single swing to an entire playground.

”They were excited and they supported her 1000%,” Rebecca said. “They actually added to her dream and vision and did the whole playground… originally Santii just had a goal of getting a swing put in.”

Her mission got the attention of community groups like Endless Highway, a local not-for-profit working to create opportunities for people with physical disabilities, which contributed to her planning and fundraising efforts.

As the vision grew bigger, so did her reach. She even appeared on The Kelly Clarkson Show in December 2020 and again in September 2021.

She’s also making waves politically. Last summer, a resolution was passed in the New York State Assembly honoring Santii’s “ceaseless dedication to children with disabilities.”. Now, Assemblymember Josh Jensen has introduced the “Everyone Can Play” bill that would require all New York State parks to have accessible playground equipment and would afford municipalities the opportunity to apply for grant money to install the equipment. Santii recently traveled to Albany and stood with Assemblymember Jensen as he spoke about the bill.

As News10NBC was visiting Santii at the playground she helped create, Megan Nolan from Greece and her young son Bennett (who uses a mobility device with wheels) were there enjoying the equipment.

”So many playgrounds have wood chips or difficult-to-navigate environments,” Megan said. “To be able to bring him here and let him play with other kids like any other child would is just amazing. We get to practice his walking, which he loves to do, but he can’t do at a lot of playgrounds.”

In addition to the wheelchair-accessible swing, the playground features a spinning We-Go-Round (Santii’s favorite), sensory equipment including musical instruments, and a soft, rubbery ground.

A big reason why she wanted to do this…

”She loved the swings at the time,” Rebecca said, “and she said I want all the kids to feel the wind in their hair.”

Demonstrating altruism and humanitarianism beyond her years, Santii is living proof that there are no dreams too big and no dreamers too small.

”I love it when the wind just blows my hair back,” Santii said, “and that happens on a swing when it just blows your hair back and I wanted every kid to feel that because it feels so nice.”

If you’d like to see the fruits of Santii’s dedication and commitment to people with disabilities for yourself, stop by Basil Marella Park at 975 English Road in the Town of Greece.

To learn more about the many ways in which Santii makes our community a better place, you can follow her journey on her Facebook page here.