A few showers today before a better chance tomorrow 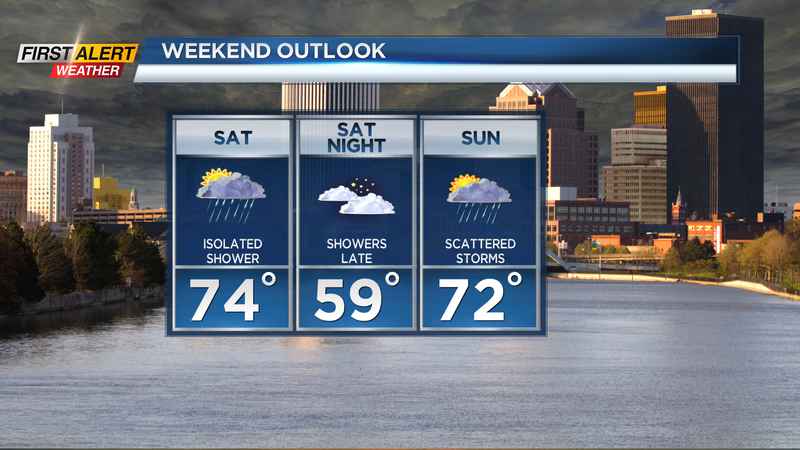 A mixture of sunshine and cloud cover is expected for this Saturday, but so is a chance for a few isolated rain showers and a rumble of thunder. The best chance for a shower or two will come during the afternoon but a stray shower can not be ruled out this morning.

After another cool start to the day, high temperatures make their way into the mid 70’s this afternoon. A shower is possible early tonight, but most of the night will feature cloudy skies with lows around 60. Mostly cloudy skies are expected to start off Sunday, but scattered rain showers will likely arrive during the middle of the morning. Umbrellas will likely be used early Sunday morning but drier weather is expected to move in during the afternoon.

A cold front will swing through and help clear things out during the afternoon but an isolated shower or rumble of thunder will be possible tomorrow afternoon. Washouts are not expected at all for Saturday or Sunday, but we will have to dodge a few showers or storms through the afternoons. Highs Sunday afternoon will reach the mid and low 70s once again. If you are not a fan of the recent cool stretch of weather, the good news is that milder weather is expected towards the middle of next week.

Highs by Wednesday afternoon will reach the mid 80s and generally remain on the mild side through the remainder of the work week. However, things do not look to remain mild into the following weekend as a cold front swings through Thursday afternoon and cools us down to near 70.