ROCHESTER, N.Y. (WHEC) — Riders from "A Horse’s Friend" saddled up and hit the streets of Rochester to try and spread a little joy.

The ride Monday was called "Kids Come First". This isn’t the first time the group has toured the city, but with a recent increase in violence, this was meant to create smiles on the faces of our kids in the community.

"When I saw them I got off my couch and I was like ‘Yes! I have to go outside, there’s horses!’” Alice Patton said in pure excitement, which is the exact reaction the group was hoping for.

The group saddled up at Flint Street Recreation Center and rode through all the surrounding neighborhoods waving to anyone who wanted to say hello. Since 2004, Matthew Doward, the founder of "A Horse’s Friend" has been making connections between the animals and kids in the city of Rochester.

Doward said the focus was on the farm last year but his heart is in the community especially in a time where the kids need support the most. 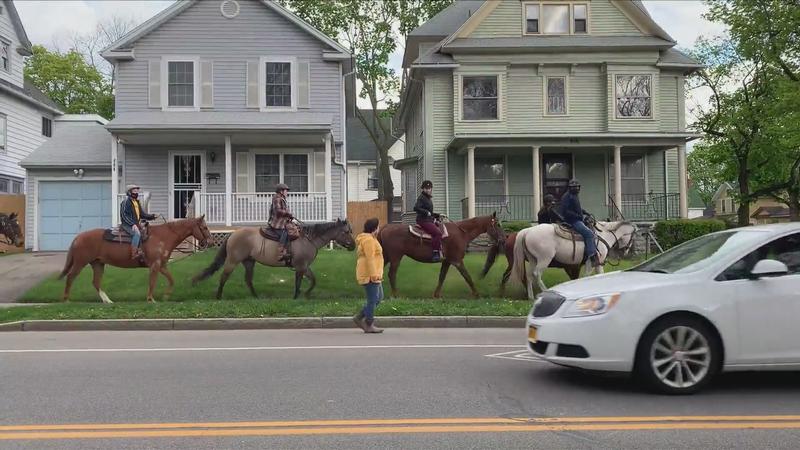 "There is so much going on in the city right now especially with the youth and violence there are kids that are left out so we wanted to bring our horses back in the city and let those kids know they aren’t forgotten,” Doward said.

The main purpose of the ride is outreach to kids and families that have been affected by the uptick in violence and the strain on our mental health due to COVID-19 shutdowns.

"I love when people run out of their homes to say hello and it’s just a great way of outreach and it’s also a great way to be involved in the community,” Brad Craddock said.

Sloan Sawinski, 11, told News10NBC that she didn’t think twice about being able to give other kids her age some hope.

“There has been a lot of gunshots and killings in the city so I want to show the kids hope," Sloan said. "I don’t think it’s fair to the kids or people who get killed and injured and I just don’t know why people would want to do it.”

“They’re coming around, they’re riding, they’re giving the kids something else to look at and that’s what we need in this community is more positive and less negative,” Patton added.

Doward, the founder of "A Horse’s Friend", is one of the recipients of this year’s ESL Jefferson Awards. These awards shine a light on our local faces who never look for recognition for the work they do but rightfully deserve it. Doward is one of many who empower and inspire others to do more.