All RPD Cars to be Outfitted with beanbag guns

As part of the new City of Rochester budget, RPD allocated funding to outfit each car with a standard shotgun that fires bean-bag rounds. The guns will be kept in the trunk of the car, separate from the regular shotguns with live ammunition.

Body-worn cameras have given us all a look at the interactions between police and members of the community and one thing is clear, many of them involve highly emotional circumstances with people who may be dealing with mental health issues.

“As we move through a lot more of dealing with different calls that are different mental health crises and things along those lines, it’s really important to consider less-lethal tools,” says Lt. Greg Bello of the Rochester Police Department.

The bean-bag guns are one of those tools. “It’s got a bigger distance than a taser, taser is typically good up to about 21 feet give or take whereas this is something that is good out to 75 feet or 25 yards,” Lt. Bello says. “We’ve used them a few times recently where they really helped de-escalate a situation and prevented it from escalating into a deadly physical force situation.” 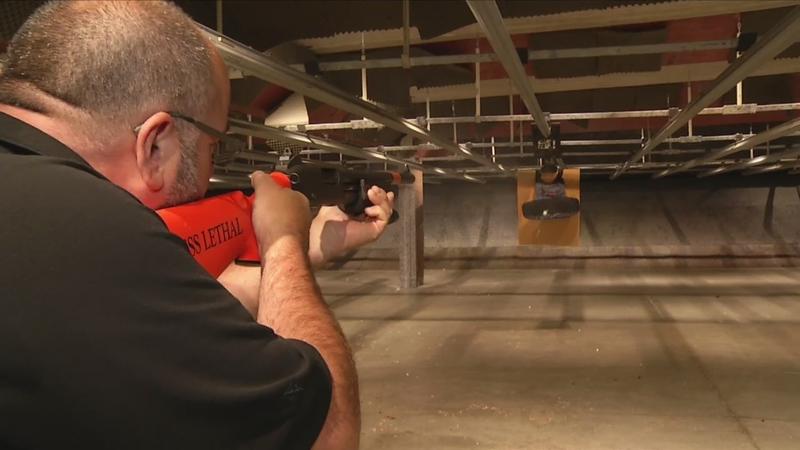 Lt. Bello went on to give an example of a time when a beanbag gun was used at a scene he responded to. "It was a domestic situation where the suspect was threatening a female with a knife, we were able to safely get her out of the house and it turned into kind of a standoff with him. He was in the house and we were at the doorway of the house and eventually, he grabbed two knives and was making motions toward us, the beanbag gun was effective in getting him to drop the knives and comply with us because it’s a painful experience to get shot with a bean bag round,” he says.

Jennifer Lewke (News10NBC) – Okay, you’ve got a regular gun, you’ve got a taser, now we’ve got a bean bag gun… how do you decipher what to use when?

Lt. Bello – So, a great example would be somebody with a deadly weapon but not necessarily a gun. A bean-bag gun would be good for somebody with a knife, some sort of edged weapon, a sword…we’ve had instances with blunt objects like pipes, baseball bats, things along those lines that could very easily create serious injury to someone or even death but not a firearm in terms of a projectile type situation.

Most of the time a bean bag gun is used when officers have time to fully assess a situation. “It’s not something that one officer would pull out and use by themselves, an operational plan would be put in place and there would be a team of officers,” Lt. Bello says, including officers prepared with deadly force if the bean-bag gun doesn’t work.