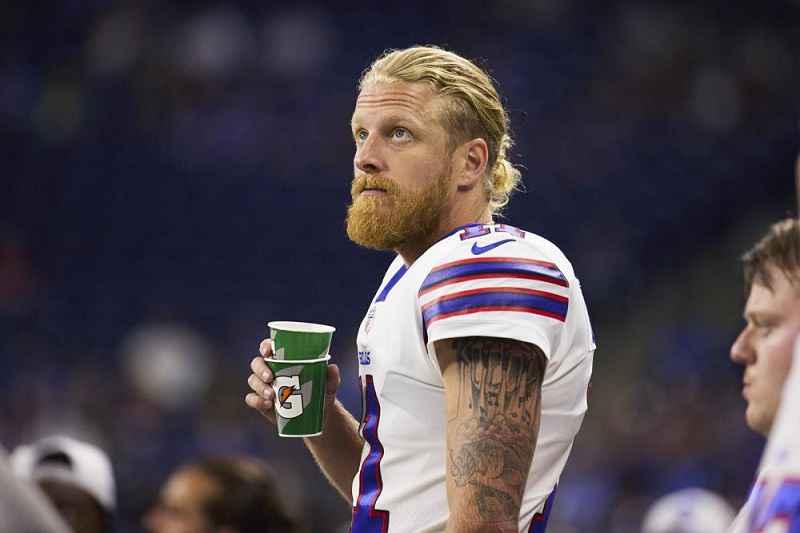 FILE - Buffalo Bills wide receiver Cole Beasley is shown on the sideline during an NFL preseason football game against the Detroit Lions in Detroit, in this Friday, Aug. 13, 2021, file photo. Beasley and Gabriel Davis must spend at least five days away from the team facility after having close contact with a trainer who tested positive for COVID-19, a person familiar with the situation told The Associated Press on Tuesday, Aug. 24, 2021. That means Beasley and Davis will miss the Bills’ final preseason game on Saturday, when Buffalo hosts the Green Bay Packers.[(AP Photo/Rick Osentoski, File)]

ORCHARD PARK, N.Y. (AP/WHEC) — The Buffalo Bills granted veteran receiver Cole Beasley permission to seek a trade, a person familiar with the discussions confirmed to The Associated Press on Friday.

The person spoke on the condition of anonymity because the Bills were not going to formally announce the news. NFL.com first reported the development earlier in the day by citing general manager Brandon Beane saying Beasley’s camp approached the Bills seeking permission to talk to other teams.

Beasley just finished the penultimate season of his four-year contract he signed with Buffalo in 2019.

That year, he had a career-high, six touchdown receptions in fifteen games played. The last two years, he’s totaled five, one of which came this past season.

Despite that one touchdown reception on the season-stat sheet, Beasley caught 82 passes, the second-most on the team.

The comes after a season where the team’s fans booed Beasley during a home game against the Houston Texans back in October. Beasley claims fans yelled at him to get the COVID-19 vaccine. He was vocal about his decision not to get it.

"Only place I get boo’d is at our home stadium. Then some of the same people want to take pictures and sign autographs. I thought Bills fans were the best in the world? Where’d they go? If the vaccine works then why do vaxxed people need to be protected from unvaxxed? #letmein," he tweeted at the time.

The Bills are open to Beasley returning if he can’t orchestrate a trade. Buffalo already stands to lose receiver Emmanuel Sanders, who completed a one-year deal and hasn’t determined whether he’ll retire after 12 NFL seasons.