He spoke at a Monday press conference in Buffalo along with other attorneys and the family of Ruth Whitfield, who was one of the 10 people who died during Saturday’s shooting.

Crump said that the manifesto the suspected 18-year-old shooter posted made it clear that he wanted to kill as many black people as he could, in an act of hate.

He said that authorities should investigate how the shooter developed hateful beliefs, including examining if a white supremacist conspiracy called "Race Replacement Theory" played a role. The suspect’s manifesto mentioned the conspiracy theory. 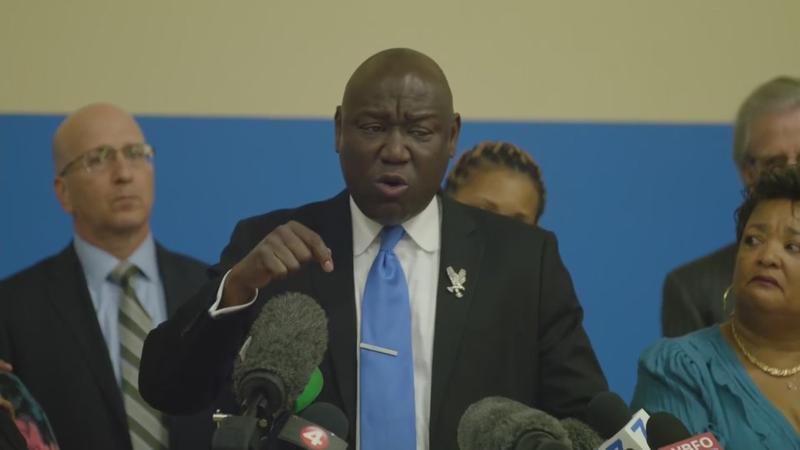 Attorney Ken Abbarno said that “all of the signs and red flags were there” to monitor the suspect and prevent him from acquiring a gun. The alleged gunman made threatening comments that brought police to his high school last spring. After, he underwent mental health evaluation at a hospital for a day and a half.

Terry Connors, an attorney at a Buffalo law firm, said he will help the family get answers about how the shooting happened in the first place.

Crump called on Congress to pass a bill that supports the prosecution of hate crimes against black people.

Crump, along with his firm, has represented the family of George Floyd, Michael Brown, Trayvon Martin, and those affected by the Flint Michigan water crisis.

Crump says “we need to make sure that the world knows that we have to respond to this act of terrorism.” He said they intend to hold accountable the suspect & those responsible for the root of the hate. @news10nbc

We are thoroughly investigating the horrific shooting and the events leading up to it. The victims’ grieving families deserve to know how this happened. We will get ANSWERS and hold those responsible for this tragedy accountable!

News10NBC Anchor Deanna Dewberry interviewed Terrence Melvin, who holds numerous positions of leadership including 3rd Vice President of the Buffalo chapter of the NAACP, President of the Coalition of Black Trade Unionists, Secretary-Treasurer of the New York State AFL-CIO, and serves as Executive Director Task Force on Racial Justice for the National AFL-CIO.

She asked him how the community’s leaders managing this crisis and what can be done to aid healing and build trust. Those are questions for Buffalo native Terrence Melvin. Melvin also shared why the shooting rampage at a grocery store in the heart of the Buffalo Black community is especially painful.

Watch their interview in the video in the player below (mobile users, click here):

“The recent shooting this afternoon at a Tops Market in Buffalo was horrific and heartbreaking and a reminder that evil can strike at any time and at any place. The Department of Justice is investigating this heinous offense as a hate crime and as an act of racially motivated violent extremism and must be prosecuted to the fullest extent of the law. I pray for the families of the victims, the police officers and first responders, and the entire City of Buffalo for having to endure this tragedy and I stand in solidarity with all New Yorkers for the people of Buffalo.”

“Some crimes are truly unforgivable. This past weekend in Buffalo, a crime of unforgivable magnitude occurred when a hate-filled terrorist took the lives of ten innocent people in cold blood. We are heartbroken. We are also outraged. Now it is clear that New York must send a message to those who would deliberately target our neighbors based on the color of their skin. We do not tolerate racism. We do not tolerate terrorism. We do not tolerate acts of extreme violence on innocent civilians. We must bring capital punishment back to our state today, and deliver the only justice that is appropriate in this case and to ensure acts such as these never happen again.”

Assembly Republican Leader Will A. Barclay:

“There are instances when a crime is so egregious and the damage so devastating the punishment must be commensurate to the act. The evil that we saw in Buffalo was a senseless tragedy and leaves a scar on our society. For this reason, I am calling for the Legislature to reinstate the death penalty in New York in certain cases, like the one we witnessed this weekend. New Yorkers are living in fear, and it is growing worse by the day. Events like the one that took place in Buffalo reinforce the need to act swiftly and comprehensively. I urge my colleagues in the Legislature and Gov. Kathy Hochul to take the steps needed to protect those in their charge. The path we are on now is unsustainable and dangerous. We must levy the full measure of the tools of justice we have available.”

“Our nation’s collective heart stands with the victims of the horrific racially motived massacre that occurred at the Buffalo Tops store this weekend. This cold-blooded terror has caused ten lives to be lost, families and loved ones to grieve the worst loss, and people scared to go about their daily lives. The disgusting hatred that motivated this attack has no place in our society and tears at our very foundation.

"With the rise in violence we are seeing, many members of our community are already living in fear within their own homes and now, many will fear even getting groceries for their families or picking up a prescription for a loved one – this is intolerable. We must come together to ensure that the rampant violence, no matter the cause, will cease.

"This attack hurts all of us, and the motivation behind it should disturb all of us. It is a sobering realization that if Erie County Inmate #157103 had not changed his planned attack, it could have occurred right here in Rochester. The victims could be even closer to home – our direct neighbors, family members, friends, or even you or me.

"My prayers are with, and my heart goes out to the victims and families impacted by this repugnant act. We must all do more to prevent such horrific tragedies from becoming conceived, much less carried out. Our children must be taught love and respect for people of all races, ethnicities, religions, and sexual orientations. Hatred and intolerance have no place in our society.

"I traveled to Buffalo yesterday to offer my support and I will continue to lend any help I can provide in the coming weeks. The Monroe County Legislature stands behind our neighbors in Buffalo and ready to assist in any way we can.”

"We are aware of social media posts circulating online from the alleged shooter that purportedly indicate locations within the Rochester community. We take these potential threats, and any other potential threat towards the safety of our community, with the utmost importance. The Rochester Police Department is continuing to work with our local, state and federal partners to verify information and act upon it accordingly. Thankfully, the brave men and women of the Buffalo Police Department took the suspect into custody, rendering him no longer a threat to society. We encourage anyone with information regarding any threats towards the safety of our community to please call 911.

“A simple Saturday afternoon at the local supermarket should never end in violence, tragedy and death. Across our state, streets, subways, businesses and homes have been turned over to criminals. The Buffalo tragedy is a brutal reminder of the raw, violent hate on the rise in NY. Asian Americans have been killed in NYC with knives, hands, and hammers. Three Jews were assaulted this past week in Brooklyn. Sikhs have been beaten up. None of it is welcome here, in any form."