IRONDEQUOIT, N.Y. (WHEC) — News10NBC issued a Yellow Alert due to possible flash flooding Thursday, and some areas near Rochester certainly saw just that.

On Edgebrook Lane right off of Titus Avenue in Irondequoit at around 6 p.m., crews cleared a flooded area.

Besides flash flooding on the roads, many homeowners spent their Thursday evening getting floodwaters out of their homes. 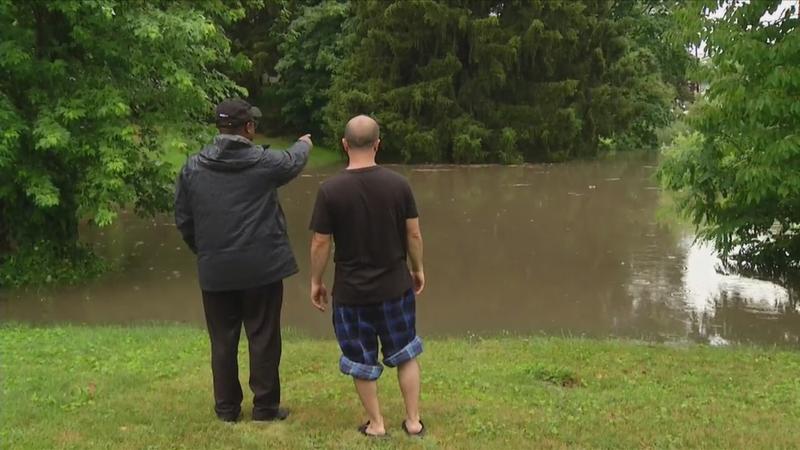 News10NBC was in Irondequoit and spoke to a couple of homeowners who had to deal with water getting into their basement.

Many streets here in town had several inches of standing water at one point during the afternoon due to clogged drains. With nowhere else to go, water started flowing into some basements.


Heavy rain passing through Irondequoit causes some flooding. Homeowners we talked to say water has gotten into their basements. pic.twitter.com/zX7AJpaHuh

Pictures of flooded creek on Titus Avenue in Irondequoit. pic.twitter.com/OAovWXWy9A

Floodwaters got into Raydel Geerrero’s Titus Avenue home late Thursday afternoon. He allowed News10NBC access to his basement where crews found a bin that was already filled with water.

Just outside his home, the normally low creek that cuts through his property overflowed its banks, as a result of flash flooding when the fast-moving rainstorm passed through the area.

"I have a pump in the basement so I’m trying to somehow connect it to another hose, and get it out," Geerrero said.

Just a few blocks away Town of Irondequoit Department of Public Works employees were busy trying to drain a flooded section of Edgebrook Lane. Minutes after News10NBC arrived they found the clog and were able to drain hundreds of gallons of water.

"I have a crock in my basement that doesn’t even have a sump pump on, and I never had an issue here, and I’ve lived here over 14 years, and the water was coming back up through just because there was so much flooding in the streets, and it wasn’t going down fast enough," said Jason Sinclair, who lives on Edgebrook Lane.

The flash flooding did cause some minor traffic accidents, but luckily News10NBC didn’t see any stalled vehicles due to the flooding.