Behind the scenes of CATS at the RBTL

ROCHESTER, N.Y. (WHEC) — After an 18-month intermission, Broadway returned in New York City Tuesday night, and now the Rochester Broadway Theatre League is back with a big debut next week.

Technical crews have been in Rochester for the past few weeks setting up for the award-winning musical "CATS”. News10NBC’s Jenny Ly goes behind the scenes at the auditorium as the crew prepares for the national tour.

“It has been an incredible experience with such a welcoming community, and we’re just thrilled to be here,” said Troika Entertainment’s Chief Operating Officer and producer of “CATS” Kori Prior.

Leading the tech crew of nearly 100 people, Prior and her team have been in Rochester in the weeks leading up to the national launch.

“We have brought in over 85 people for over 2000 hotel nights. They are living here, spending money in local restaurants and enjoying all that Rochester has to offer,” Prior said. 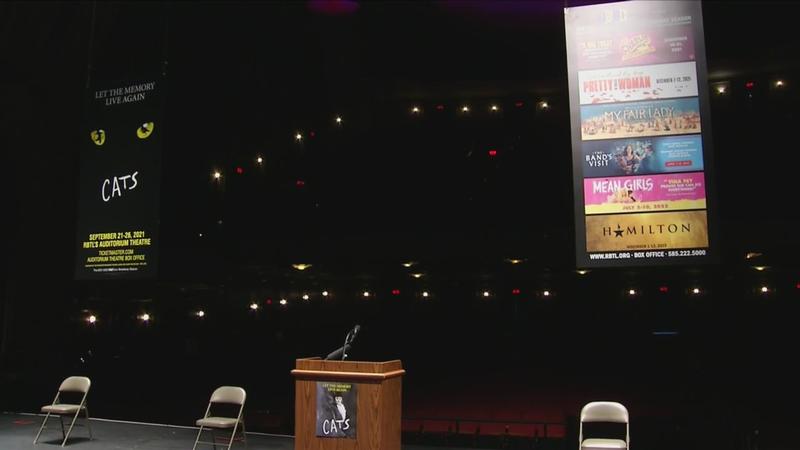 Equally excited and eager is John Parkhurst, the theater’s chief operating officer, who says he has taken the steps to ensure the venue is safe and ready to host a large audience.

“We were able to do the repairs and the improvements to our HVAC – the MERV 13 filters. We have all new air handling equipment. We went out and bought portable units that are here in the lobby, they’re’ in the dressing rooms so people can actually see the air moving,” Parkhurst said.

The touring group hopes it is also helping one of the pandemic’s other victims: The local economy.

“It’s our union people, our wardrobe folks… these folks have been out of work for 17-18 months. The local restaurants – they’re back open. There are people going out to dinner, the parking attendant. It just trickles down and everybody is affected by this. The hardware stores where we buy equipment, the paint stores, the HVAC stores have been very happy with us,” Parkhurst added.

Like the much-needed economic boost, they hope to lift our spirits as well.

“’CATS’ is a story about redemption, resilience, magic, fun and mystery, and we are so pleased to bring it forward at this time when everybody needs a night out and enjoy some beauty and some art,” Prior said.

If you are planning to attend one of the shows next week, be prepared to come full. RBTL said there will be no concessions offered as a way to remind people to keep their masks on at all times. No proof of vaccination is required, just wear a mask.