Bello made the comments during a joint briefing he and Mendoza held with the county’s Democratic Caucus Monday morning. The proposal was submitted on July 13.

To find the full proposal, click on this link and start on page six.

Bello says Republicans, and members of the Black and Asian Caucus proposed new ethics legislation that would result in Mendoza needing to vacate his position, as it would prohibit outside employment by county employees. 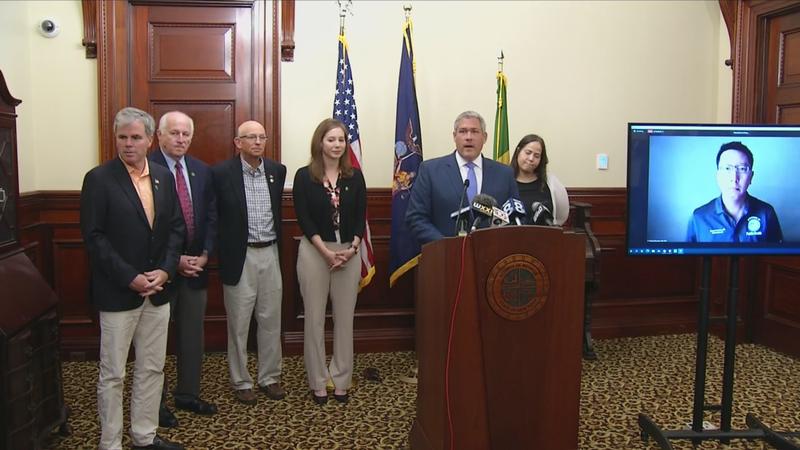 Mendoza currently serves as an Associate Professor for the University of Rochester School of Medicine and Dentistry. He has also maintained his private practice at Highland Family Medicine since becoming Public Health Commissioner back in 2016.

In order to keep his board certification, Mendoza must continue to see patients. The new law would prohibit, without exception, outside employment by county employees. When asked, Mendoza said he would choose to remain a physician.

"I’ve worked way too hard in my career," Mendoza said. "Gone through a lot of training to obtain my board certification in family medicine. I’m a Fellow at the Academy of Family Physicians. I’ve just been made Professor at the University of Rochester, quite frankly, I hope to have many more years of professional life ahead of me and I would hate for something like this short-sighted to end my career in the county."

The county’s Board of Ethics previously announced its findings in the case against Legislator Ernest Flagler-Mitchell, who was accused of inappropriate conduct by several women. Bello said the proposal would have protected Flagler-Mitchell from public scrutiny by imposing criminal penalties for publicly sharing the board’s findings.

"It even goes so far as to impose criminal penalties for the disclosure of any findings of ethics investigations, and violates existing freedom of information laws," Bello said.

The full press conference can be found below.

"This purported ethics reform is either rooted in gross incompetence and a total lack of understanding how government actually works, or it codifies partisan coverups of bad acts while perpetuating a hostile attack on county employees who serve our community. Either way, it’s dangerous, and this proposal should never have seen the light of day,” Bello said. “Dr. Mendoza and countless other Monroe County employees bring a level of expertise and knowledge to County government that helps to improve the services we provide and elevate the quality of life for our residents. They do not deserve to be targeted in this way.”

County Democrats previously introduced their own ethics reform package in April in wake of the Flagler-Mitchell case. In that package, anyone found in violation of the rules would be subject to fines, suspension, or even removal from office.

Bello said the proposal outlined by Republicans does not address issued brought up by Democrats. A physical copy comparing the two proposals was handed out to the media and can be found below. Mobile users, click here.

Ethics Comparison by News10NBC on Scribd

Monroe County Republicans argue that management and professional employees will not be pushed out of county positions, saying, "As has been previously and publically stated, sponsors of the proposed Local Law are working to find solutions to ensure the County does not risk losing valued employees. This section was initially added to avoid appointees from outside employment and diverting their attention from County efforts."

Republicans also say that the confidentiality clause only keeps the County Executive and Legislature from sharing private, privileged information unless approved by a two-thirds vote in the Legislature, and that the measure is intended to protect the anonymity of those who make ethics complaints.

Republicans said the law would not "water down" ethics boards but would ensure equal representation by prohibiting stacking the board with unequal amounts of Democrats and Republicans and creating stricter rules about the political involvement and history of Board of Ethics Members to make sure "longtime political operatives and donors are not using the office as a means for politically-motivated investigations."

The Republicans also say there would be no change to the definitions of sexual harassment and harassment proposed by the Democrats.

The Black and Asian Caucus released the following statement:

"The Black and Asian Democratic Caucus of the Monroe County Legislature condemns statements made today by County Executive Adam Bello and members of the minority caucus of the Legislature connecting them to legislation submitted at last week’s meeting. “Actions and statements like this are evidence of why we can’t trust the Bello administration and his cronies in the Legislature. We have never said we support this legislation and he is putting words in our mouths while talking out of both sides of his,” said Assistant Black and Asian Democratic Caucus Leader Sabrina LaMar. “Saying they want ethics reform and then posturing by pledging a veto before it has even come before a committee is hypocritical.” In addition to disagreeing with the County Executive assuming the Caucus’s position, the Caucus also completely and forcefully denies wanting Public Health Commissioner Dr. Michael Mendoza to leave his position. Dr.
Mendoza has done an excellent job leading the County through the COVID-19 pandemic and we are glad to have him as Commissioner."

“Proposed local laws submitted to the Legislature are subject to significant vetting through the Committee process, public hearing, a vote of the Legislature, and ultimately, the signature of the County Executive. The exchange of ideas and opinions is encouraged through this entire process; unfortunately, the County Executive and Democrat legislators chose to act reactively by holding a press event rather than working collaboratively to seek solutions.

“Even more shocking than County Executive Bello’s fabrication of the truth is his intention to veto important ethics legislation. This legislation is necessary and politics cannot interfere with making sure the right thing is done.”