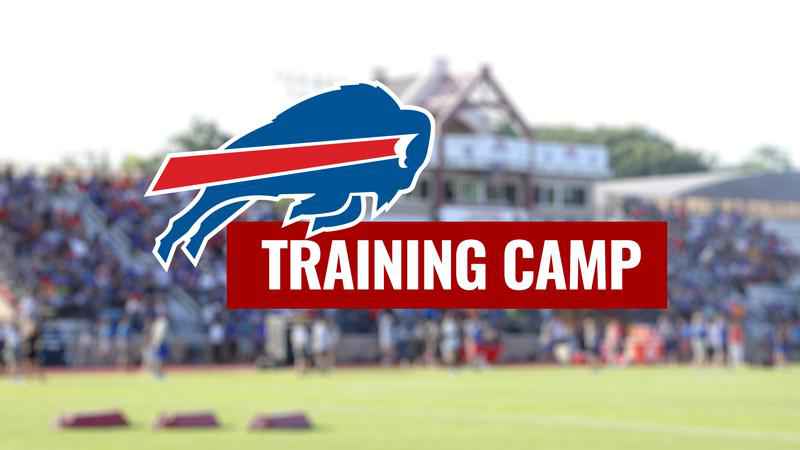 ROCHESTER, NY (WHEC) – Bills Training Camp is almost here! It’s the team’s first time back at Saint John Fisher University since 2019 before COVID kept them at the Orchard Park facility in 2020 and 2021. It’s an exciting time for Bills Mafia, as the team heads in favored to take home its first Lombardi trophy in franchise history. It adds more intrigue to training camp this time around, as the roster spots matter that much more especially for players on the fringe.

With that in mind, here are my key themes to keep an eye the next three weeks.

On paper, Stefon Diggs is the clear No. 1. Though Gabe Davis hasn’t been as consistently reliable as a No. 2 receiver should be, the flashes he showed last year including the epic performance in the AFC Divisional game against the Chiefs will all but certainly make him the 2nd option at wide-out. A similar story can be told for Isaiah McKenzie. He exploded for 125 yards and a TD on 11 catches in week 16 against the Patriots but otherwise, was targeted only 20 times on the season. It’s no secret that the Wide Receiver room could use some depth. Thankfully, a few guys could emerge out of camp.

The loss of Cole Beasley creates a clear need in the slot. That’s where the veteran comes into play. That’s his natural spot on the field including the past three years he was with the Jets. In that time, Crowder amassed 1,900 receiving yards and 14 TD. He could also bring a veteran presence to the room.

Along those lines, Tavon Austin could do the same. In his 10th year last season, he played 13 games with the Jaguars for the first time since 2019, tallying 24 catches for 213 yards and a TD. While those might not be the most appealing numbers, he is heading in with a chip on his shoulder. Assuming he makes it past roster cuts, that type of competitive drive could be something that lights a fire under the rest of the WR room.

When Jim Naggy invites a player to the Senior Bowl, that guy is worth looking at. Buffalo did just that and wound up drafting Shakir in the 5th round of this past draft. NFL.com gave him a decent prospect grade. He is seen as someone who could be useful in an array of situations so, if Ken Dorsey can maximize the play calling, don’t be surprised if Shakir makes some noise.

O-Lineman To Keep An Eye On

Barring any injuries, Dion Dawkins, Spencer Brown, and Mitch Morse are all expected to be lining up on plays. Ike Boettger is someone with an unclear outlook. He played in the first 15 games of last season before sustaining an injury. Though he’s been active in the offseason, the hope is that he’ll continue taking strides towards being an everyday part of the line. Though Tommy Doyle earned more snaps in weeks 17 through the wild card round, there’s someone else who could emerge.

Buffalo signed David Quessenberry in the offseason, fresh off of playing all 17 games with the Titans last season. He can shift between guard and tackle, making him valuable to a unit that went through a decent amount of shuffling a year ago. One caveat was the eleven sacks he allowed, according to Pro Football Focus. Will he take Spencer Brown’s spot from him? Most likely not but it’s easy to envision a scenario where he’s on the team for the season opener in LA.

How Big Of An Impact Is James Cook Expected To Have In Year 1?

By the numbers last year, Buffalo’s run game was actually top-10 in the major categories (Yds, TD, 1st down, etc.). However, it’s no secret where a chunk of that came from: Josh Allen. As long as QB1 remains a dual threat–and there’s no reason to believe that won’t be the case for a while–Buffalo will always be able to move the ball on the ground. However, it’s unfair to ask your QB to pick up the slack on the ground with what would be added wear and tear on Allen’s body overtime. Buffalo needs a reliable RB. Devin Singletary kicked things into a higher gear in the last quarter of the 2021 season and added three TD in the playoffs. Yet, questions still remain about his effectiveness. Regardless, one area of need that was unquestionable for Buffalo come the season’s end: versatility in the backfield. Singletary and Zach Moss combined for just two receiving TD on the season.

That’s exactly where Cook comes into the fold. Buffalo used their 2nd round pick on him for a reason. Fresh off of helping Georgia to a National Championship, he rushed for over 700 yards and 7 TD along the way. While that’s attractive, he was just as effective as a pass-catcher. Cook hauled in 27 receptions for 284 yards along with 4 TD over the course of the season. Obviously, this allows Drosey to get very creative when crafting the playbook and whenever the offense needs to adjust on the fly. Having a versatile Back to complement Allen’s abilities can only bode well for the Bills.