BUFFALO, N.Y. (WHEC) – The return of the blue and red did not disappoint.

Here at Highmark Stadium, nearly 36,000 people packed the seats just to watch practice. Now, that tells you all you need to know about the fans. And it also speaks to how well the Bills are expected to do this year. But when it comes to Bills Mafia, the players appreciate every ounce of support.

“I’ve been in some special places,” outside linebacker Von Miller said. “But Buffalo is different, man. You know, all the kids out here, everybody’s supporting now. You see so many 40 jerseys. It’s incredible, man. We’re gonna have a full year, man. This is a great and fun fanbase, man, and I’m excited to get it going for real.”

“Like, ever since, like, the young guys I got here, the older guys and the young guys, the rookies, I’ve been telling them, I’m like, Well, I have no idea,” offensive lineman Dion Dawkins said. “I have no idea. And they’re like, All right, all right, all right. Now they see it and they like, doc, we understand now. So the good thing is that the fans continue to show out and show up. And this place is epic and it’s electric here.”

“And this is probably the most fans I’ve ever played in front of,” Bills’ 2022 fifth-round pick Khalil Shakir said. “And it’s crazy. It is a practice, right? So I think Boise only held like 30, 35,000 and sold out a couple of times. But then I came here and they were like maybe a little more than that. So it’s kind of mostly about playing in front of minute. It was a fun experience, great atmosphere, have fun at.” 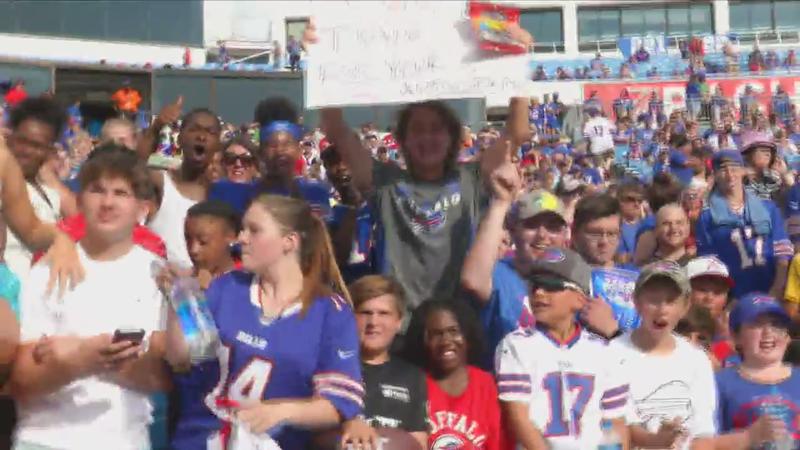 The Bills will get an off day tomorrow before heading back across the thruway to Rochester for the final week of camp at Saint John Fisher University. That ends Thursday. The preseason begins two days later at Highmark Stadium in Orchard Park.