ORCHARD PARK, N.Y. (AP) – The Buffalo Bills won’t renew their lease with the state and county without a partially publicly funded agreement in place for a proposed new $1.4 billion stadium, leaving the team’s future uncertain beyond July 2023.

“No, we absolutely will not,” Pegula Sports and Entertainment senior vice president Ron Raccuia told Buffalo’s WBEN-Radio on Thursday.

In saying the topic of relocation has not been raised during discussions with government officials, Raccuia didn’t entirely rule out that possibility by using the word “yet” when asked if the Bills might begin looking elsewhere once the lease expires in about 23 months.

“We’re not even focused on that, yet,” said Raccuia, who is chief negotiator in talks for PSE, the parent company which owns the Bills.

“We’re just committed to getting everybody together as quickly as possible to get to a solution,” he added. “Talking about options and what happens if, that serves no purpose. It’s not where any of our focus or resources are being dedicated.” 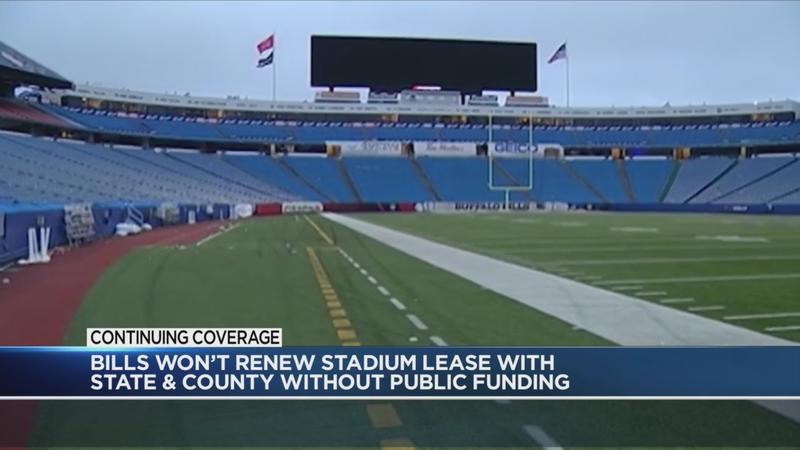 During a wide-ranging interview, Raccuia otherwise confirmed the cost, size and location of the Bills proposing to build a stadium in Orchard Park, New York, across the street from their current facility, Highmark Stadium, which opened in 1973.

At issue is how much the project would cost taxpayers in what Raccuia called a public-private partnership that would potentially include NFL funding. The expectation is the public will be asked to fund more than 50% of the cost.

A message left with Gov. Kathy Hochul, who is from Buffalo, was not immediately returned. On Monday, her office released a statement to The AP, which read, “no one is more committed to keeping the Bills in Buffalo” than Hochul, and that details will be shared once negotiations are completed.

Erie County Executive Mark Poloncarz was not available. He previously dismissed speculation of the Bills possibly relocating but issued a warning by saying taxpayers won’t be writing what he called “a blank check.”

The Bills have ruled out renovating Highmark as being cost-prohibitive as opposed to starting fresh.