PENN YAN, N.Y. (WHEC) — Heads up if you plan to go out on that boat, several area county sheriff’s offices have issued boating advisories Thursday.

The advisory was made due to heavy rain overnight.

Boaters should keep an eye out for floating debris in the water and reduce speeds to no wake as the water has risen considerably, and in some areas even over docks.

Sheriffs’ Marine patrols are currently out on the water responding to issues including reports of boats floating away in the lake. 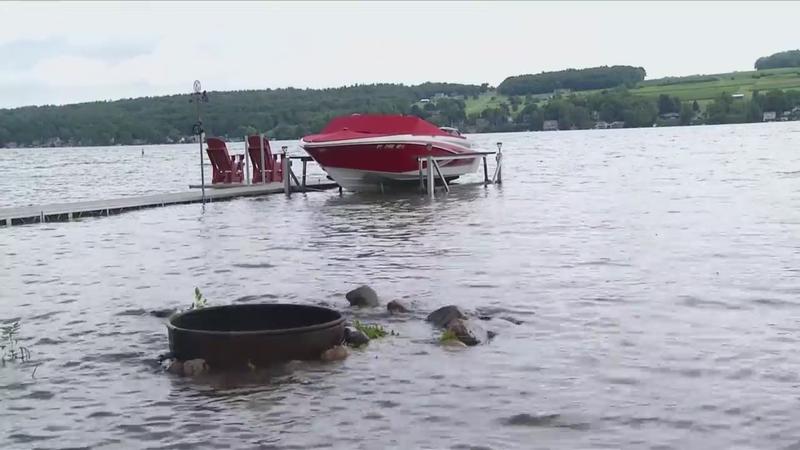 There have also been reports of flooding.

"We’ve had… 60 incidents of people reporting flooding in their basements," Sheriff Spike said.

That was the case for Gerald Sullivan. His house is on East Bluff Drive along the Keuka lakeshore. At one point the water in his basement was up to eye level.

"Never seen anything like it before, the sump pump overheated," Sulivan said.

"You’re always concerned about water being involved in a basement like that, what it could do to electricity, electrical issues or gas issues," Sheriff Spike said.

After a day and night of heavy rain, Barb and Chic Friedrich’s dock on West Lake Road was covered in debris. Their neighbor’s dock was completely submerged.

Crews were there at around 1 a.m. with heavy-duty equipment to clear out water and debris.

"It’s been years of problems with it. Years," Barb said.

Crews were also out Thursday afternoon on Route 29 in Guyanoga, widening a gulley for the water to drain.

"It’s been very busy for them," Sheriff Spike said. "We’ve made 37 contacts to highway departments regarding roads that are partly flooded or culvert pipes that are plugged and backed up and causing issues that way."

Seneca and Canandaigua Lakes are also reporting similar conditions in some areas.

Seneca County Sheriff W. Timothy Luce issued a high water advisory for Cayuga Lake and Seneca Lake and the Canal in Seneca County. The advisory includes a “no wake zone” within 500 feet of shore. Sheriff Luce is also warning boaters to watch for floating debris.