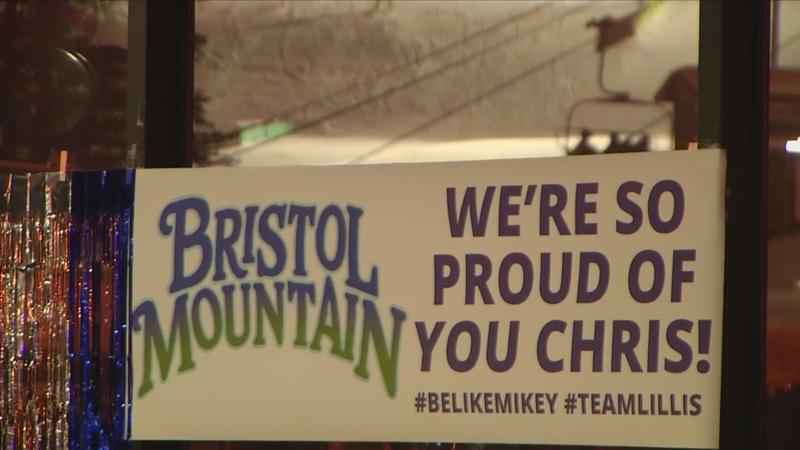 SOUTH BRISTOL, N.Y. (WHEC) — As America cheers for its newest gold medalist in the winter Olympics, a Bristol Mountain skiing community is celebrating the triumph of one of its own.

Chris Lillis of Pittsford led Team USA to the gold in the high-flying mixed team aerials skiing Thursday and Thursday night he was honored where it all began when Bristol Mountain hosted a watch party for his victory in Beijing.

Chris Lillis’s mother, Jamie Lillis, said it’s been a long road to get to this point but she wouldn’t trade it for anything.

"Surreal," Jamie said. "Just pride, full of not really astonishment because I knew he had it in him but just satisfaction that he made it."

Lillis’s parents cheered for him during the watch party and said if they couldn’t actually be in Beijing, they wouldn’t want to do this anywhere else.

"In the winter, this is our kid’s playground," Jamie said. "This is where we came and we spent every single weekend."

"The ski team was going to fly the parents out to go to watch parties in Park City and you go, you can ski there free for three days and we declined it because we’d rather be here," Bernie said.

The quest for the gold in China, for Chris and his brothers, started on the slopes of Bristol with the Bristol Mountain freestyle team.

Today’s generation of teammates was on the slopes but made sure to come together to relish Chris’s victory.

"One of our team members from here won the Olympics, which is really cool," said Bristol Mountain freestyle skier Teddy Kula.

"All the energy from here goes to him because he won gold for Team USA and it’s really cool how he started out here and he went all the way to the Olympics and I kind of want to do the same thing," said Ryder Cook, another teammate.

Fellow freestylers and his family, say when Lillis took to the air, they could see his was a medal-winning performance and he ended up putting Team USA over the top for gold in mixed team aerials, but Chris is not finished. He told his mom he’s fired up for the individual competition next week.

"We said ‘How do you feel?’ and he said, ‘Feeling a little greedy. I want to do it again." Jamie said.

Chris will be coming back to Bristol back, soon to ski or fly in the US National Freestyle Aerials Championship at Bristol Mountain on March 13.