BROCKPORT, N.Y. (WHEC) — It’s a memorial people see every day driving down South Main Street in Brockport. A tribute to the 343 firefighters who died on September 11th, 2001.

Like every year since the attacks, people will gather in Brockport to honor the first responders who made the ultimate sacrifice. The memorial stands for all to see and remember what happened 20 years ago today. A day that changed America.

"You’re seeing the three firefighters that raised the flag on 9/11 in New York City," said Christopher Martin with the Brockport Fire District. "It can be a little eerie because they’re very lifelike."

It’s based on the iconic photo taken by Thomas Franklin at Ground Zero.

"The steel beam came from the towers, shortly after the attacks," Martin said. "There’s some ceramic tile from the lobby floor of the towers." 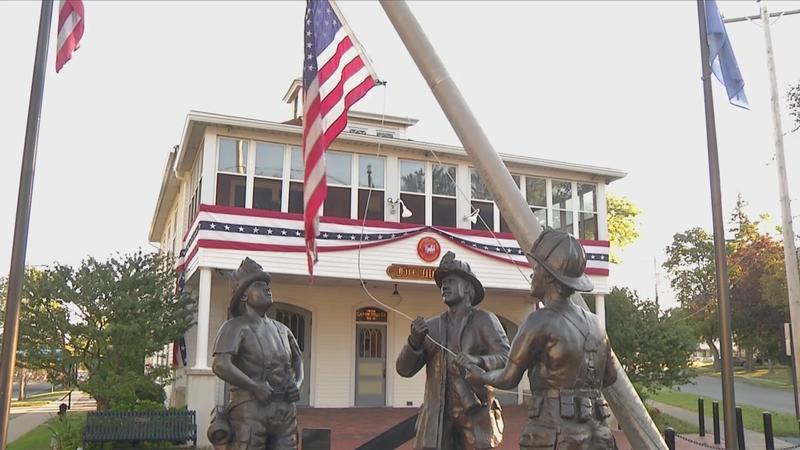 You can see that tile and steel for yourself and touch it. A part of America’s past.

The planning for the memorial started a month after the terrorist attacks. Local artist Richard Kron originally carved the monument out of white oak. It was later replaced with bronze statues.

"Now the bronze will stand the test of time," said Martin.

"What are your thoughts 20 years later?" asked Rudd.

Like most of us, you never forget where you were when you heard the news. A terror attack on American soil.

"We do a 12-hour vigil every September 11th regardless of what day of the week it falls on," said Martin" We have uniformed firefighters, EMTs, police officers, and the military and we welcome the community. Every year on the 11th. People come and they pay their respects and they honor the fallen."

People come from all over to pause and remember. While everyone was running away from the towers that day, firefighters ran in.

"It was second nature to them," explained Martin. "They weren’t standing at the base of the stairs saying, ‘Should I or shouldn’t I?’ They were just going because that’s what we trained to do and that’s what we do every day."

The 20th anniversary 9/11 vigil in Brockport begins at 8:30 a.m. Saturday. Flags will be lowered to half-staff at 8:47 a.m., a minute after the North Tower was hit and first responders rushed to the world trade center. Uniformed Honor Guard will be standing vigil all day with a closing ceremony planned for 6:30 Saturday night. Everyone is invited.