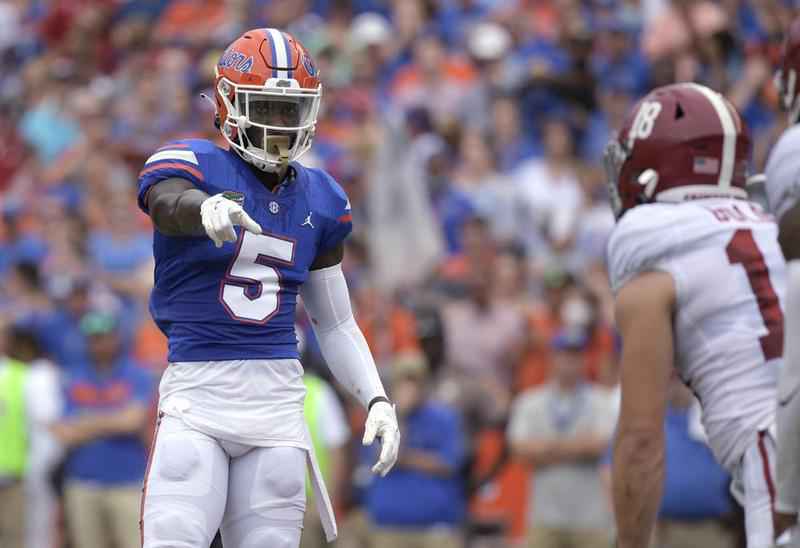 FILE - Florida cornerback Kaiir Elam (5) sets up for a play during the first half of an NCAA college football game against Alabama on Sept. 18, 2021, in Gainesville, Fla. Elam was selected by the Buffalo Bills during the first round of the NFL draft Thursday, April 28. [(AP Photo/Phelan M. Ebenhack, File)]

ORCHARD PARK, N.Y. (AP) — Brandon Beane heard everyone loud and clear about how the Bills needed to place a priority on selecting a cornerback in the NFL draft.

Though Buffalo’s general manager didn’t disagree with the sentiment, Beane wasn’t sure whether whether he could land one until the Bills were two selections away from making their first-round pick on Thursday night. Rather than risk losing out, Beane traded up two spots to take Florida’s Kaiir Elam at No. 23.

“I just felt like it was within striking distance,” Beane said of the decision to trade the No. 25 and 130th picks to Baltimore and jump ahead of the Dallas Cowboys.

“And obviously, I’ve been hearing it loud and clear that we don’t have a corner from every single one of you, neighbors, kids, everyone,” he added with a chuckle. “So we’ll all sleep good tonight.”

Beane said Elam was the final player Buffalo had on its draft board with a first-round grade, and was spurred into action after the Kansas City Chiefs traded up to select Washington cornerback Trent McDuffie at No. 21. Though the Cowboys weren’t projected to select a defensive back, Beane feared another team trading up to get Elam.

“You’d love to just sit there and not do it,” Beane said, of making a trade. “But you know, he was sitting out there and we really felt like he’s going to be a great fit in our defense.”

At 6-foot-1 and 191 pounds, Elam has the size, speed and pedigree to immediately compete for a starting spot.

His father is former NFL defensive back Abram Elam, who had 71 starts in 101 games with four teams split over a seven-year career that ended in 2012 with Kansas City. And his uncle is Matt Elam, a former first-round pick who had 26 starts in 41 games with Baltimore from 2013-16.

Elam credited his father and uncle for helping him mature faster as an NFL prospect, while adding he’s eager to get to Buffalo on Friday.

“I told them to put the playbook on the plane,” Elam said, from his home in Florida. “I’m trying to learn as much as I can right away and just get better and contribute to the team and try to strive for immediate impact right away.”

In leaving college following his junior year, Elam’s best season came in 2020. He earned first-team All-SEC honors in 2020 when he had two interceptions and led the Gators with 11 passes defensed in 13 games, including five starts. Last year, he had one interception and credited with defending six passes in 10 games, while missing three with a knee injury.

Beane cited Elam’s experience of being comfortable facing some of college football’s more elite receivers in the SEC. He also noted the maturity the player showed during his pre-draft visit to Buffalo in asking what the team saw in him and what made White an elite cornerback.

“Just some really good questions, a guy that’s serious and focused and driven to be really good at his craft,” Beane said. ”

Elam became Buffalo’s first cornerback selected in the first round since White went No. 27 in 2017.

He joins a defense which finished ranking first last season in numerous league categories, and one that upgraded a middling pass rush in free agency by signing the NFL’s active sacks leader, Von Miller, to a six-year contract.

The Bills defensive backfield has consistently been among the league’s best in featuring White and the veteran safety tandem of Micah Hyde and Jordan Poyer.

Buffalo has emerged as an AFC power in the five years since Beane and coach Sean McDermott’s arrival. The Bills have qualified for the playoffs in four of the past five years and are the AFC East two-time defending champions for the first time since a four-year run from 1988 to ’91.

Aside from defensive back, the Bills had depth needs at receiver after cutting Cole Beasley and with Emmanuel Sanders completing his one-year contract and yet to decide whether to retire.

Barring trades, the Bills have six more picks over the final six rounds, starting with the 57th and 89th overall selections on Friday.