Cannabis Countdown: What legalized marijuana might mean for taxpayers

ROCHESTER, N.Y. (WHEC) — Soon, New Yorkers will be able to legally buy marijuana. Where those retail stores might be located has been a hotly debated topic over recent months as some local towns and villages have decided not to allow dispensaries.

News10NBC made a trip to Massachusetts to explore how taxpayers in towns that opted-in and out there, ended up faring.

Marijuana has been legal for less than 5 years and already the Commonwealth of Massachusetts is generating more sales tax revenue on the sale of it than it is on alcohol. It’s big business for the state but cities and towns that allowed dispensaries have seen a tax windfall too.

The City Council in West Springfield, Massachusetts voted to opt out of allowing dispensaries in 2017. 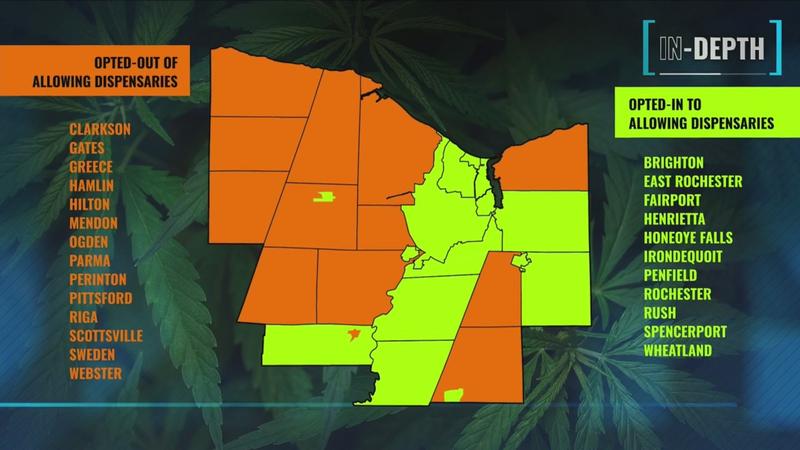 Every time someone walks into a dispensary in Massachusetts, his or her ID is scanned. Reichelt says ZIP code data shows 700 people who live in his City visited a single dispensary in a nearby town last year, that’s just one shop, there are 165 across the Commonwealth.

“We probably missed out on close to $2 million in revenue a year,” he added.

Every purchase in Massachusetts is charged a state excise tax of 11%, a state sales tax of 6% and a local tax of 3% and while 3% might not seem like all that much, “This was almost $4.5 million, it was about $350-400K in new revenue per quarter for the City which is significant,” explained David Narkewicz, the former Mayor of Northampton, Massachusetts.

“We use it as just part of our general fund, it helps to pay for education, helping to pay for public works, public safety, public health which obviously we know has been critical in the past two years,” says David Narkewicz.

The first legal shop for adult use opened in Northampton in late 2018. The lines wrapped around the building that day and the demand has remained high even with 8 other dispensaries now open in the same City.

The communities that opted out in New York can reconsider at any point and vote to opt back in. Those that opted in, are in for good.

In New York, there is expected to be a 13% excise tax on marijuana—9% will be kept by the state, 40% of which will go toward education, 40% to reinvestment in underserved communities and 20% toward drug treatment programs. Three percent will go to the local municipality where the dispensary is located. The remaining 1% will go to the county in which the dispensary is located. There is also expected to be a separate tax based on how potent a cannabis product is when it’s transferred from a distributor to a retailer.

On Friday, News10NBC investigates what New York State can learn from other states who intended to put minority-owned businesses in the front of the line for dispensary licenses—but didn’t quite excel in their social justice initiates.