Consumer Alert: A Rochester gas station owner is refusing to lower his prices despite the law requiring it

ROCHESTER, N.Y. (WHEC) — Friday, June 3rd was day three of New York’s gas tax holiday, and we’ve been tracking the prices in six cities and towns across our area. I expected some small differences from station to station in how much their prices dropped. After all, gas prices have been volatile, and a roller coaster in wholesale pricing will ultimately affect what we pay at that pump. But I didn’t expect any station owner choose not to drop his prices at all. One owner told me he’s not budging.

By Friday 9 of the 13 stations had lowered their price 25 cents or more. But there were anomalies like a Mobile station located at 57 North Main Street in Pittsford village that was priced at $5.09 on Memorial Day, then went up to $5.19 on Tuesday, the day before the gas tax holiday, then dropped to $4.99 on Thursday. It remained at the same price on Friday. The price drop was a difference of 20 cents from its Tuesday high.

A Mobil station located at 20 Erie Station on the thruway was $4.95 on Monday, $4.99 on Tuesday, then dropped its price to $4.87 Friday. That’s a difference of 12 cents. A manager told me its price is controlled, in part, by the Thruway Authority.

At a Fastrac located at 672 East Main in Rochester, the price dropped on Friday from $4.79 to $4.65, a difference of 14 cents. The manager told me the Fastrac corporate office sets the price based on the competition in the area. And at $4.65, the station is in line with most in the immediate area. 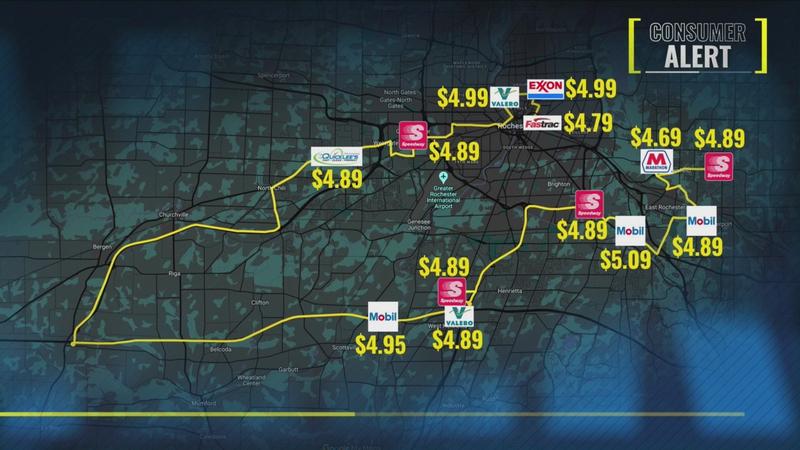 But the real head scratcher was a Rochester Exxon located at 540 Portland Avenue where the price was $4.99 before the gas tax holiday. On Friday afternoon it was still $4.99. So I reached out to owner of that convenience store and he told me he’s not giving consumers a discount because his supplier hasn’t given him one. He then provided the cell phone number for his supplier. When I called the supplier to get his response, he told me, “I’m not going to comment.” Clearly, I have more digging to do.

Failure to pass along the gas tax is illegal during New York’s six month gas tax holiday. If you believe a station is not passing along the full gas tax savings, you can call New York’s Tax Evasion and Fraud line at 518-457-0578.