Consumer Alert: How to dramatically reduce the heavy metals in your baby’s food

ROCHESTER, N.Y. (WHEC) — I’m alerting you to a movement to force the federal government to protect the youngest among us.

For weeks I’ve been telling you about the heavy metals in baby food. First, a House subcommittee found alarming levels in the jars produced by major manufacturers. Then, the D.C. Attorney General sued a baby food maker.

Then last week, the New York Attorney General jumped in the fray, launching her own investigation.

Heavy metals in baby food are not regulated. So finally, the FDA said it would begin to set levels in 2024. That raised the ire of almost every group in this country that cares about kids.

More than 100 organizations that include pediatricians, scientists, and groups that advocate for those with disabilities wrote the FDA and pleaded with them to move more quickly. After all, we’ve known the dangers for decades. 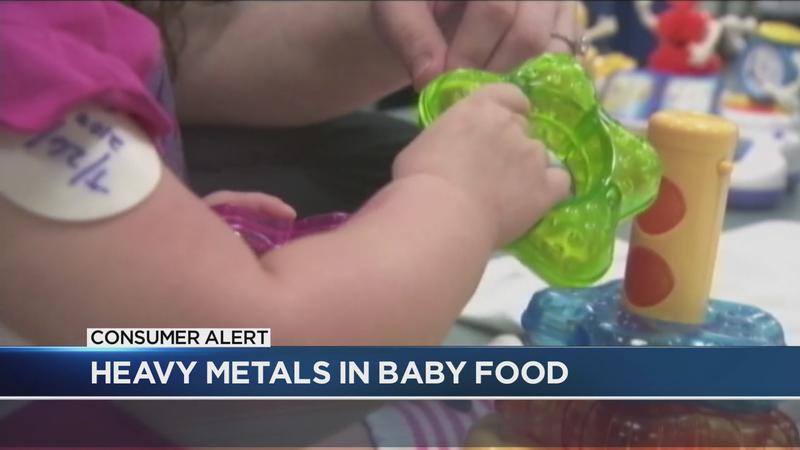 For example, we removed lead from gasoline and paint about 50 years ago because that lead ended up in the air soil, and water. But the FDA says it’s going to take three years to address lead in baby food.

I’ve gotten so many questions from many of you, but this is the most frequent one: “Don’t these metals occur in soil naturally? Why should we worry about them?”

Yes, the metals we’re talking about here – arsenic, lead, cadmium, and mercury are in the soil and water and then plants absorb them. And yes, heavy metals do naturally occur in the earth’s crust.

But our actions have greatly increased soil contamination. Mining, smelting, fracking, as well as industrial and agricultural use of metal compounds contaminate the soil and end up in the food we eat. That’s why root vegetables like carrots and sweet potatoes are more contaminated. Babies exposed to heavy metals can have a lower IQ and a higher cancer risk.

So because you’ve been reaching out to me about the issue, I’ve done more research on the topic.

Here’s Deanna’s Do List for decreasing the heavy metals in your child’s baby food.

But some juices tested well. Click here for the results of the Consumer Reports testing and a chart of the best juice options.

And most importantly, don’t worry. With some simple dietary changes, you can dramatically limit your baby’s heavy metal exposure.