Consumer Alert: July 4th food is up 11%. How to have a backyard barbecue without your wallet going up in smoke

ROCHESTER, N.Y (WHEC) – For many, it’s not 4th of July without a backyard barbeque with family and friends. But this year’s beef, buns, and beer will cost far more than last year.

According to a study done by Wells Fargo agri-business advisors, you’re paying about 6 percent more for hot dogs and ice cream than last July 4th. You’re shelling out 7 percent more for produce, and there’s been a more than 8 percent hike in the cost for shrimp. Your buns are 10 percent more, and the ground beef that goes between those buns is almost 12 percent more.

Do you want a Coke and a smile? The price may not make you smile. The price of soda is up 13 percent. But that pales in comparison to the price of chicken breast. It’s up 24 percent. And that beer that washes it all down? 25 percent. So you think you have to have wings? You better have cash. They’re up a whopping 38 percent more from last year.

But if you’re willing to make some changes to the menu, there are ways to save. The authors of the Wells Fargo study say instead of the burgers and brisket, how about pork or shrimp tacos? The price of pork is up only 3 percent, and the price of shrimp is still lower than the five-year average. And rather than beef ribs, grill pork ribs instead.

If you want to save, ditch the ice cream. Non-dairy cold treats like gelato or popsicles have actually fallen more than 4 percent. And when you buy your beer, choose a domestic super premium option. 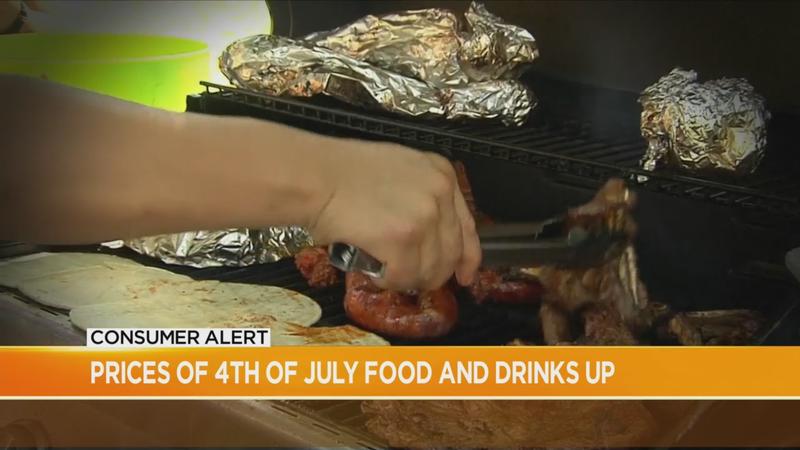 I know what some of you are thinking that it’s just not the 4th without hot dogs. While the price of those franks are up, they’re still a much cheaper option than beef. Yes, your celebration will cost more. But with planning, you can still have that party without breaking the bank.