ROCHESTER, N.Y. (WHEC) — This consumer alert is taking a look at protecting pets and their people.

The numbers are likely much higher now. During the lockdown, we emptied the shelters, adopting Patches, Princess and Poppy the parakeet too. That’s why a recent consumer investigation by USA Today has led to some panicked pet parents.

You’ve seen the cute Seresto commercial. A playful pooch brings home everything from the neighbor’s bra to her begonias. But the ad tells us that adorable pooch pilferer does not bring home ticks and fleas because he’s wearing a Seresto collar.

Seresto is one of the most popular brands in the country, but a recent investigation in USA Today earlier this month, distressed mom and dog dads across the globe. 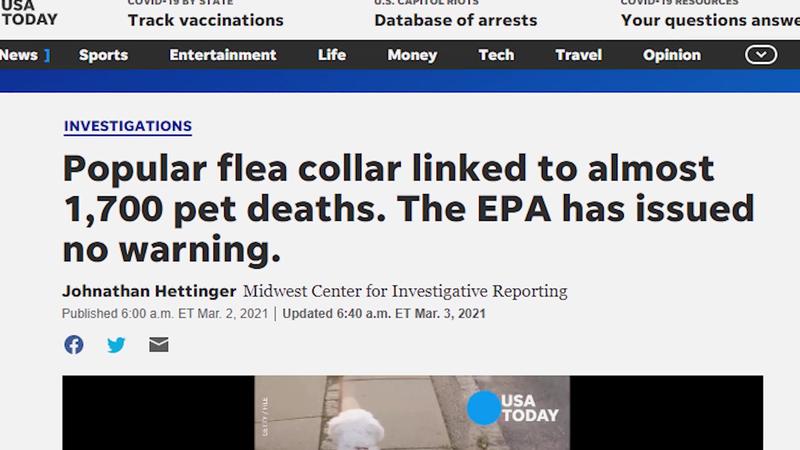 It said since the collars hit the market in 2012, they’ve been associated with almost 1,700 dog deaths, 75,000 adverse events and almost a thousand injuries to the people who love those pets. All are reports that consumers made to the EPA.

The collars kill pests when the dog or cat absorbs two key chemicals through its skin. For that reason, the USA Today story says people were also adversely affected and reported those health effects to the EPA.

The USA Today report is also critical of the EPA for failing to warn consumers. I reached out to the EPA and no one returned my emails.

But a representative from Elanco, the company that owns Seresto spoke openly. Colleen Parr Dekker, Executive Director of Elanco Global Communications calls the USA Today investigation highly misleading saying "one of the most significant challenges with the story is that an adverse event report is not an indication of cause."

Dekker says,” Elanco takes the safety of our products very seriously, and thoroughly investigates any potential concerns related to their use. It is critically important to understand that a report is not an indication of cause. The documents referenced are the raw data from the incident reports to the EPA, and do not reflect causality or post-investigation findings. If a dog were to be wearing a collar and experienced any sort of health issue, the collar would be mentioned in the resulting report as required. For example, if a dog were to pass away from a car accident, and was wearing a Seresto collar, that would meet the criteria to be included in these reports, even if the collar was very obviously not the source of the issue. Further investigation and assessment is required to determine cause, often a veterinary exam or necropsy, as well as continuously monitoring the data for signals or trends. That further investigation has shown there is no established link between exposure to the active ingredients in Seresto and pet deaths. “

Dekker also points to the very low rate of consumer reports of problems compared to the number of products sold.

She wrote, "Since its approval, the incident report rate for all adverse events related to Seresto globally is less than 0.3% of users." She pointed to the fact that the writers of an article in VIN (Veterinary Information Network), an online information source for veterinarians don’t believe the evidence supports the collars causing the array of very different illnesses reported to the EPA.

It’s important to note that because the product is expensive, potentially dangerous counterfeit products have flooded the market. At most authorized sellers of the product, one collar sells for about $60.

If the product you find online is far less than that, don’t buy it. The problem of counterfeit collars is so pervasive, Bayer, the previous owner of Seresto, made a video to help consumers tell the real collars from the fakes.