ROCHESTER, N.Y. (WHEC) – "I quit." Those words come from two members of Rochester’s newly-formed Housing Quality Task Force or HQTF. Those members were the only ones on the HQTF who represent renters.

The mayor formed this task force in February to address the city’s housing crisis. Now the leaders of the City-Wide Tenant Union of Rochester as well as the city’s Homeless Union are withdrawing from the task force in protest. And now there’s clearly some dissension among the ranks.

On Tuesday I sat down to talk to Liz McGriff, a community organizer with the City-Wide Tenant Union of Rochester about her decision to step down. She and Stacey Jerningan of the Rochester Homeless Union withdrew from the task force on Friday, June 10. During our discussion, McGriff immediately pointed to the city’s slumlord problem. More than 60 percent of Rochesterians rent. And half of those renters are living in substandard housing. But McGriff says the task force favors landlords and is unwilling to address the needs of Rochester renters.

On February 15th, the mayor held a press conference in the rotunda of City Hall to announce the formation of the Housing Quality Task Force or HQTF.

"The teamwork begins today," said the mayor pointing to the twelve task force members standing beside him. The HQTF included landlords, civic leaders, a homeless representative, and one woman who represented the voice of Rochester renters, Liz McGriff. 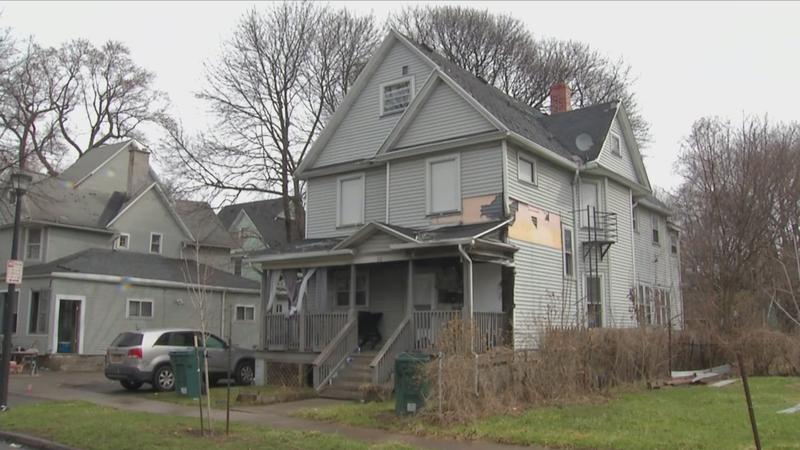 "You will definitely have with this task force folks that will have different viewpoints. Liz Mcgriff from the tenant union will bring her voice," said Mayor Evans while pointing out the diversity of the task force.

And so on that day, I asked McGriff a crucial question.

“There will be those who say that this task force is putting lipstick on a pig,” I said to McGriff. “You say what to that?

“I’m saying, I don’t know that yet," McGriff responded.

That was in February. She’s now served on that task force for more than three months. So I repeated that question. And this time she answered, “I think it’s lipstick on a pig.”

She says the task force ignored her recommendations to improve Rochester’s slum problem. So she quit.

But McGriff insists the way to address housing quality is by confronting the city’s failure to enforce its own codes. I exposed that failure in May when I visited the rental home of Rochester resident Joyce Nelson. She’d lived in the home two years, and she says the home’s 70 code violations were not repaired, including a grapefruit-sized hole in her roof. The home also has no certificate of occupancy

I also exposed the problem in March when I showed viewers the boarding house that Rochester resident Zanetta Green was renting. That home had mice, leaking faucets, and a rotten bathroom floor. That home had more than 40 violations and no certificate of occupancy.

That’s why I specifically asked the mayor about code enforcement at that February press conference when he announced the formation of the task force.

But McGriff says that’s one of many issues the Housing Quality Task Force has failed to address. And so, she says she’s out. What message did she hope to send? She says she wants HQTF to sincerely collaborate with tenants; she refuses to remain on the task force just to give it the appearance of legitimacy.

Barbara Pierce, Rochester’s Director of Communications says no one with the task force was available to talk to me on Tuesday, but she did send me a statement from the task force co-chairs, Aqua Porter and Carol Wheeler. The statement reads:

“The City-Wide Tenant Union and Homeless Union have been important and valued members of the Housing Quality Task Force. Their seats remain available to them.

The Task Force together established a deliberative process to define and prioritize dozens of short-term recommendations, specific to housing quality and actionable by the City of Rochester, for the Mayor’s consideration. This process continues.

Task Force recommendations, to be presented to the Mayor next week, will reflect the input of all participants, a large and diverse group of local subject-matter experts who represent stakeholders including the homeless, tenants, homeowners, and business owners.”

The HQTF recommendations are supposed to be complete next Friday, June 24.