Consumer Alert: The scam that could steal your identity and your car. Here’s what you need to do.

ROCHESTER, N.Y. (WHEC) — I’m alerting you to a scam that could steal your identity, your car, and your sanity. This is a doozy. For weeks, I’ve been investigating cases of cyber thieves using victims’ stolen identities to buy auto insurance policies. Then they can access even more of your private information. But one Penn Yan woman’s story serves as proof that because of this scam, you could lose your wheels as well.

My two investigations on April 6 and April 7 revealed that cyber-thieves are using New Yorkers’ names and addresses and buying auto insurance online. During the process, they get access to more of your driver’s license number, and that opens a wealth of doors for all kinds of nefarious activities.

In the state of New York, thieves can use your driver’s license number to do everything from filing a fraudulent unemployment claim to applying for a personal loan.

The bills are then sent to the unsuspecting New Yorker whose identity has been stolen, and many of those bills have a big bold threat on the back saying in essence, You better pay or "by law, your insurance carrier is required to report specific termination to the commissioner of motor vehicles." That’s exactly what happened to Penn Yan resident Kathy Bower. She’s one of perhaps thousands of New Yorkers victimized by this scam. A cyber thief bought a GEICO auto insurance policy using her stolen identity. Days ago, she got a threatening letter from the DMV.

"So that letter just basically said that GEICO had terminated my insurance on 3/19 and I had not notified the DMV, and I had to surrender my plates,” Bower said. 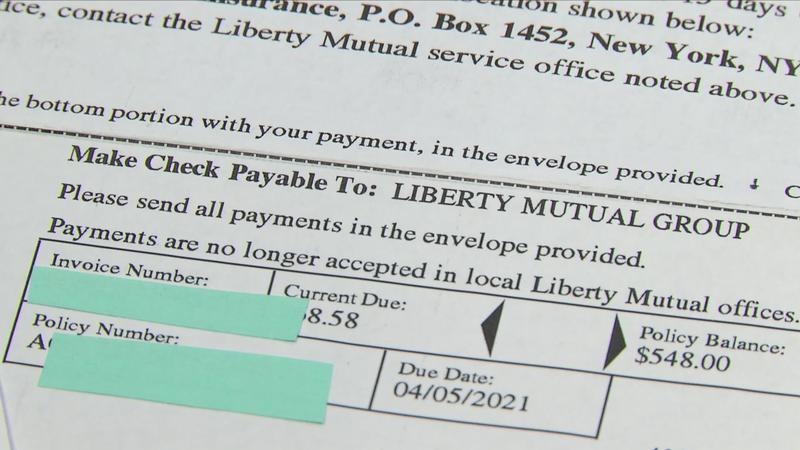 GEICO had notified the DMV when Bower didn’t pay the insurance policy a thief had bought in her name. The cyber thief had used Bower’s name but he had the wrong address. So Bower had never received the bills from GEICO. She had no idea she’d been scammed until she got a threatening letter from the DMV, and for days she was afraid to drive. After all, when she called the DMV, the warning was dire.

"They’ll impound your vehicle,” Bower recalled being told. “Do not drive. You have no insurance. That’s what she said!"

So I called the DMV. To be clear, Bower has auto insurance and is in good standing. So why didn’t the DMV know that? Was it safe for her to drive? A DMV spokesman told me yes, Bower can drive her car without fear of her car being impounded. But she’s been warned to keep proof of her insurance in her car in the vehicle. Bower’s real insurer was a big help. A representative contacted the DMV and assured them that Bower does indeed have insurance.

I reached out to GEICO as well. No one got back to me by our deadline. The DMV says it’s working with victims. If you get a letter from an insurer with which you don’t do business, don’t throw the letter away. It’s important to take care of this immediately. First, call the insurer that sent the bill to notify them about the fraud. Then immediately call the DMV’S Insurance Service Bureau at 1-518-474-0700. You can also check your insurance status online.

It’s important that you get assurance from the DMV that your records regarding your insurance coverage is correct.