Consumer Alert: We monitored the prices at 13 gas stations across the area and our findings were surprising

ROCHESTER, N.Y. (WHEC) – The gas tax holiday began today and lasts through the end of the year. It’s supposed to bring down the price of gas by about a quarter in Monroe and Livingston counties. In counties that didn’t waive their portion of the gas tax, your savings should be 16 cents. But News10 NBC viewers have been asking the following question: Will gas station owners pass those savings on to us, as consumers?

So on Memorial Day, I started tracking the prices at gas stations across our area to see if we’d really see the full price drop. It’s important to note that I only used the credit card price so we had a fair comparison at all stations.

My 76-mile Memorial Day trek took me to 13 gas stations across Monroe County. I started in Rochester taking pictures of prices at Fastrac on Main Street where regular unleaded was $4.79, Exxon on Portland where gas was $4.89 and Valero on North Clinton where gas was priced at $4.99.

Then I headed west to a Speedway on Buffalo Road in Gates where gas was $4.89 as well as the Quicklee’s in Gates. Prices tend to be higher on the highway so I checked out a Mobile station on the thruway where gas was $4.95 which is about a nickel higher than the most frequent price of $4.89.9 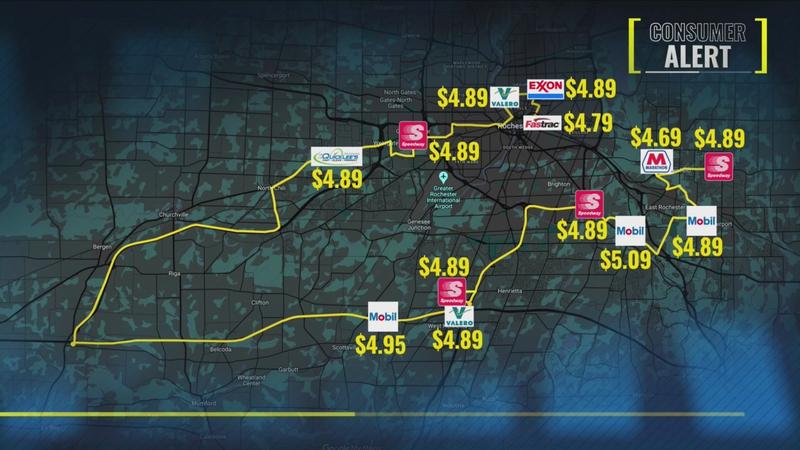 Gas was $4.89 at 8 out of 13 stations, and that was the case when I checked all the stations on Tuesday. The price changed at only one station, this Mobile station in the village of Pittsford where gas went up a dime to a whopping $5.19.

Then on Wednesday, the gas tax holiday began. When I checked Wednesday morning, the price at four of the stations was the same. Clerks told me they’d been told to change the price at the end of the day or tomorrow morning. That’s because gas station owners have already paid the gas tax for the gas purchased before today. So the state is allowing them to wait until they’ve sold all that gas and fill their tanks again before changing the price.

But for large stations with lots of business, the price changed this morning. Five stations dropped their price from $4.89 to $4.64, 25 cents less than it was on Tuesday. That’s expected.

I’ve tried repeatedly to reach management at that Rochester Valero that had only a 20-cent price drop. So far, no luck. But I’ll keep trying.

As for that Penfield speedway with only a 16-cent drop, clerks told me to call the corporate office. I did just that and sent two emails, but as of the end of business on Wednesday, I had not heard back.

Remember, if you didn’t see a price change today, it will likely occur in the next few days. And if you suspect a gas station is not passing along the gas tax savings, you can call New York’s Tax Evasion and Fraud line at 518-457-0578.