Consumer Alert: Your hotel may be charging hidden fees. Here’s how you find out and avoid paying them

ROCHESTER, N.Y. (WHEC) — Want to get away? Lots of families want to take a late summer trip before the kids head back to school.

But travel expenses are far higher this year than years past. Here’s some ways to enjoy some family fun without breaking the bank.

On Tuesday, I showed you Forbes’s list of the 10 cheapest cities this summer.

They are the following:

The cities were chosen in part because they have less expensive hotel options. But you want to make sure you avoid paying those very controversial fees that hotels call “resort fees.”

Often they’re not transparent, and the traveler doesn’t realize there’s an extra fee until they check into the hotel. For example I looked at hotels in the city at the top of the list, Orlando, Florida. I compared the prices on several sites like Orbitz, Hotels.com, and Kayak. I also checked the hotel’s own website. Sometimes the price posted there is cheaper. The best price I found for the Hyatt Regency Grand Cypress is $174 a night on hotels.com. I looked at prices for the week of August 10th – August 17th. 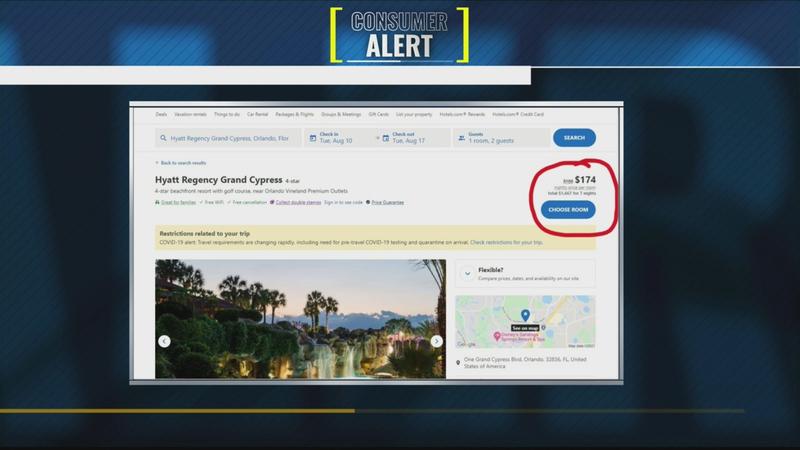 But before I clicked the buy button, I checked the price breakdown. Some websites, like hotels.com, itemizes all the expenses. I found that the hotel was charging me almost $299 for a resort fee. Those are very controversial, sometimes hidden extra fees the hotel tacks on for amenities like the pool and gym. With those extra fees, the hotel was actually $217 per night plus tax. That’s $43 more per night than the hotel’s advertised price.

Attorneys-General from several states have sued hotel chains because of those fees, and members of Congress have proposed making them illegal. A group called Kill Resort Fees was formed with the sole purpose of working to force hotels to eliminate the often deceptive fee.

I learned that among other things, the hotel is charging the fee for the use of the pool, health club, fitness center, sporting facilities, shuttle service, internet and the phone. But I what if I don’t plan to use any of those amenities? Should I be forced to pay for them? Consumer experts suggest you call the hotel directly and ask a manager to waive the fee. I tried to do just that but no one answered repeated calls to the hotel. So I called the 1-800 customer service number for the Hyatt. I had to call back four times before I talked to an agent who was sympathetic to my plight. She opened a case for me, emailed me the case number, and sent my request to the general manager. I should learn on Friday whether the general manager will honor my request.

The point is, you have to ask and be persistent. And if the general manager says no, I would simply choose a hotel without those extra fees. And look for last minute deals. The websites, "Hotel Tonight" and "One Night" are both great sites to find those eleventh hour discounts.

You can reserve a room ahead of time at a site like Hotel.com or Kayak, find out the deadline to cancel the reservation for free, and keep checking for last minute deals up until that deadline.

NerdWallet has some great ways to save on hotels. I’ve included some of its advice in Deanna’s Do List for saving on Hotel Expenses.