WARSAW, N.Y. (WGRZ/WHEC) — A Long Island couple is under arrest after a routine traffic stop led to the discovery of their alleged involvement in a nationwide fraud scheme.

The Wyoming County Sheriff’s Office says they were called to the Warsaw Walmart store last week for a report of a larceny in progress. When they arrived deputies were told the suspects had taken off in a black SUV. A 2006 Jeep Cherokee was pulled over a short time later along Rt. 19. Deputies say they discovered nearly $4,000 worth of allegedly stolen merchandise in the vehicle along with Walmart and other gift cards totaling $8,566.04. Multiple false and/or altered government ID cards were also found.

Six ledgers were also found inside the vehicle containing alleged details of a nationwide fraud scheme being conducted by the driver, 56-year-old Scott Campagnola and his passenger, 55-year-old Diane Mankowski, both of Shirley, N.Y. Deputies say the scheme involved Walmart stores from as far west as California and Oregon and as far east as Florida and Maine, with the details documented in those ledgers.

An investigation uncovered Campagnola was a four-time convicted felon who had been banned from all Walmart stores for previous crimes. Mankowski is also a previously convicted felon.

Campagnola is charged with burglary, criminal possession of stolen property, possession of a forged instrument and petit larceny. Due to his previous felony convictions, he’s being held without bail in the Wyoming County Jail following his arraignment in Warsaw Town Court. 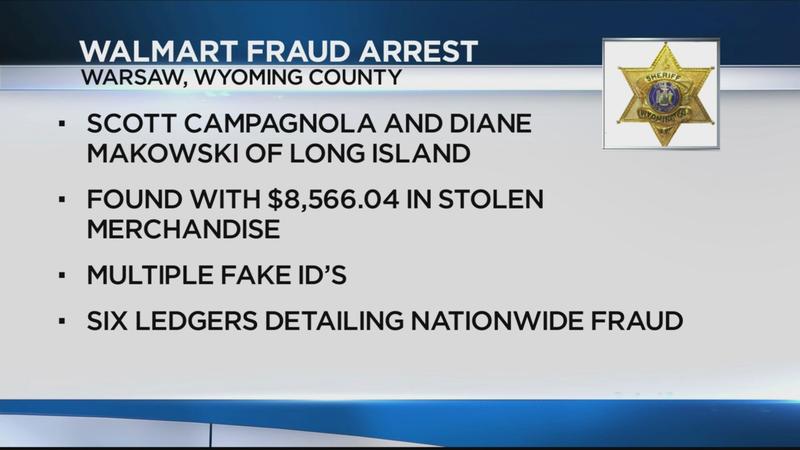 Mankowski is charged with criminal possession of stolen property. She was given an appearance ticket returnable in Warsaw Town Court on August 8.