ALBANY, N.Y. (AP) — A woman who accused New York Gov. Andrew Cuomo of inappropriate behavior added her voice to those criticizing state lawmakers for not pushing forward with impeachment proceedings.

In a tweet Sunday, Charlotte Bennett wrote that Assembly Speaker Carl Heastie’s decision to end the probe sends a message that “corruption, sexual harassment/assault and retaliation are acceptable.”

Bennett was a health policy adviser in Cuomo’s administration until last November. In February, Bennett said Cuomo asked her inappropriate questions about her sex life, including whether she ever had sex with older men.

Cuomo has said he never made advances toward her and never intended to be inappropriate.

Cuomo announced he would resign earlier this week as calls for impeachment by the Legislature grew over numerous sexual harassment allegations. On Friday, Heastie announced the Assembly would suspend its investigation of Cuomo once he steps down. 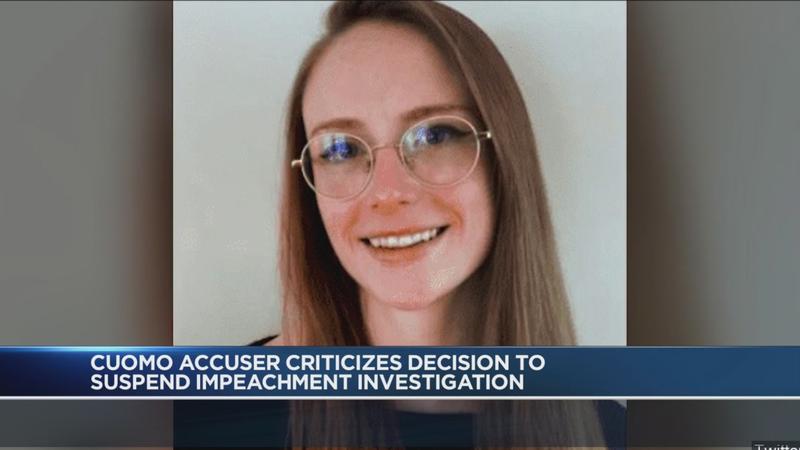 Heastie said lawyers had advised the body’s judiciary committee that the state constitution doesn’t authorize the Legislature to impeach an elected official no longer in office.

The decision was met with criticism from Republican members of the Legislature and also some Democrats. Former aide Lindsey Boylan, the first woman to publicly accuse Cuomo of sexual misconduct, called the decision “an unjust cop out.”

Lt. Gov. Kathy Hochul will take over as governor when Cuomo steps down.

Asked Sunday on CBS’s “Face The Nation” about a suggestion from Democratic Assemblyman Ron Kim that she turn over emails to prove she wasn’t aware of Cuomo’s alleged misconduct, she said, “it’s hard to prove a negative a negative because I’ve had no communication along those lines. But I believe in transparency, and we’ll evaluate all requests.”