ROCHESTER, N.Y. (WHEC) — Darnell Wilson received America’s highest civilian honor on Tuesday for heroism after he fought an armed robber at a Rochester restaurant in 2019.

32-year-old Wilson received a medal from the Carnegie Hero Fund Commission for pushing the gunman out of a restaurant on Thurston Road and Brooks Avenue on the night of December 23. The Monroe County Legislature has honored Wilson’s heroic action the month after the incident.

Wilson was visiting the People’s Choice Kitchen, a pay-what-you-can restaurant that his friend Evangela Stanley owned, when a gunman came in. Wilson jumped on the gunman to disarm him, pushing the gunman toward the front door.

In the struggle, the gunman fired his gun multiple times, but they didn’t hit anyone. Two rounds plunged through the front window, shattering it. Wilson and the gunman got cut up, but the holdup was foiled.

‘When that second shot went off, I was like… That’s what I thought about my son immediately,’ Wilson said. ‘He’s trying to kill me. I’m thinking ‘I can’t go out like this.” 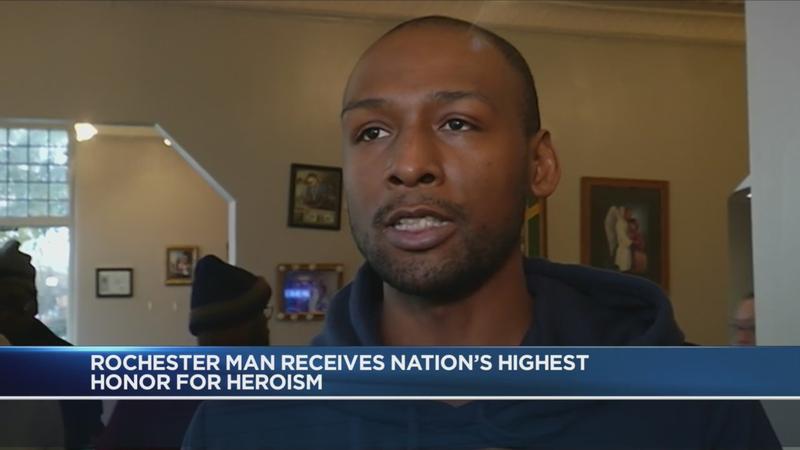 Eventually, Wilson pushed the gunman out a glass window and into the sidewalk. Wilson recovered the gun, then he and a restaurant worker punched the gunman until he ran away.

Wilson suffered several cuts after the two went through a window but no one else at the restaurant was injured.

The People’s Choice Kitchen opened the day after the attempted robbery so that it could continue to be there for the community. Stanely said she is grateful to Wilson for risking his life to protect others.

Wilson said his courage may be a lesson. "We need to pick up our community not bring it down. Not tear it down," he said.

While receiving an honor from the county legislature in January 2020, Wilson said he was doing what felt right.

"I’m really at a loss for words, especially doing something I felt was the right thing to do. I don’t know what to say honestly but thank you, I appreciate it," Wilson said.

Wilson is one of 16 recent recipients of the Carnegie Medal, given throughout the U.S. and Canada to those who enter extreme danger while saving or attempting to save the lives of others.

Police arrested Kashbi Sanders for the robbery and he later pleaded guilty.