In a statement, Cirencione said, "I’m honored and humbled to have earned the trust of Ontario County’s voters to be nominated as the Republican candidate for Sheriff in today’s Primary Election. But the fight isn’t over. We have a lot of work to do to deliver a win in November."

"You can be sure that Team Cirencione is already gearing up for the General Election battle ahead as we race toward November 8th," he said. "We will work tirelessly to deliver our message of experience and ethics to the voters, so we can continue moving the Sheriff’s Office back in the right direction."

"I want to thank my Primary opponent, Silvio Palermo, for running a spirited race," Cirencione continued. "While we don’t agree on everything, we agree more than we disagree when it comes to how the Sheriff’s Office should operate for the next four years and beyond." 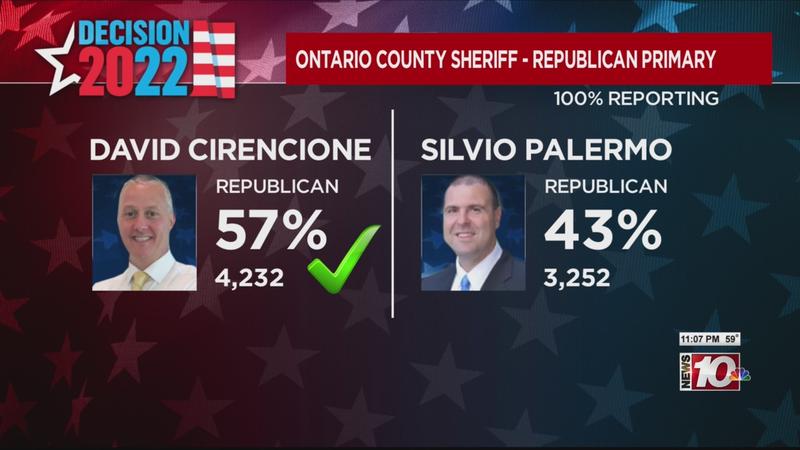 After graduating from SUNY Oswego, he started his career working in Child Protective Services in Seneca County as a social services caseworker and case supervisor. Although he found that work gratifying, his priority was to work in Ontario County, where he became a deputy with the Ontario County Sheriff’s Office in 2002.

Over the next 20 years, Cirencione was promoted through the ranks to his current role as a lieutenant in 2016. He has served as commanding officer of the Road Patrol, Crime Scene Unit, Underwater Search and Recovery Team, Field Training Officer Program and Eastview Mall Patrol. He has been an instructor at the Finger Lakes Law Enforcement Academy for the past 16 years. He’s also been a volunteer for the Geneva Fire Department for 28 years.

He lives in Geneva with his wife and three daughters.

Palermo lives with his wife and two young children in Canandaigua.