Dozens of people are camped out with a list of demands in front of Rochester City Hall Thursday.

Protesters want to make it clear they want changes to happen and it will not be “business as usual” in the City of Rochester until they’re made.

Their number one demand: the city fires and prosecutes the seven officers seen in the bodycam footage of Prude from March 23. The demands also include the resignations of Rochester Mayor Lovely Warren and Monroe County District Attorney Sandra Doorley.

Wednesday was the 15th straight day of demonstrations. Thursday is the 16th. 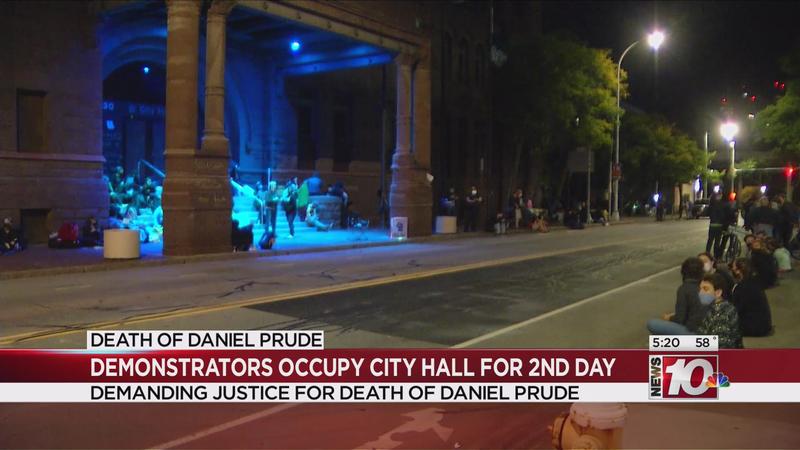 Protesters camped out in front of City Hall for the second day. [News10NBC]

Organizers of Free the People Roc had initially planned on occupying City Hall until their demands were met. However, Rochester Police officers ended up clearing out the protesters around 8:30 a.m. on Wednesday after they had been there for 24 hours.

Resisters were arrested and police cleared their camping gear and blockades.

Demonstrators returned around 5:40 p.m. Wednesday, this time staying on the sidewalks after officers made sure everyone understands the rules: they can’t block the street or access to City Hall.

After being cleared out earlier this morning, protesters have returned to City Hall. This time they remain on the sidewalks. @news10nbc pic.twitter.com/tnSs0qj7Fn

At around 11 p.m. Wednesday, protesters were pitching tents outside City Hall.

People are now starting to set up tents again in front of City Hall @news10nbc pic.twitter.com/NqxCd2dOOK