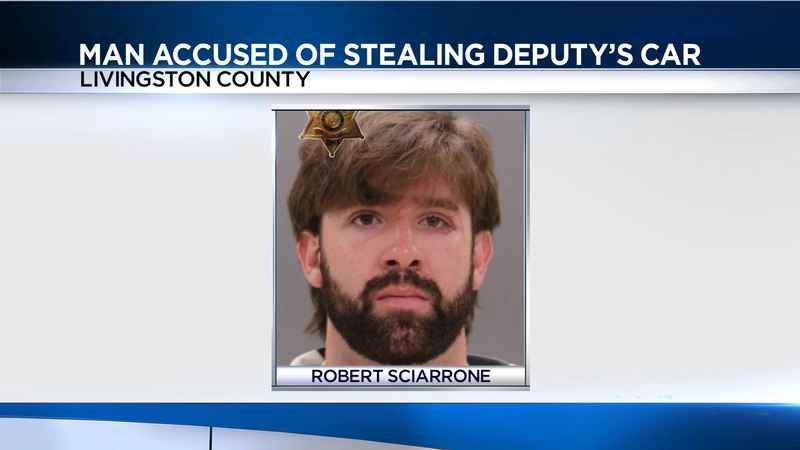 MOUNT MORRIS, N.Y. (WHEC) — A Webster man is facing charges after Livingston County Sheriff’s Deputies say he crashed a car he was driving, then stole and crashed a deputy’s police car on I-390.

The sheriff’s office says a deputy tried to stop a vehicle on I-390, but it continued driving south at a high speed, crossing over the median into the northbound lanes, before crossing back to the southbound side.

Deputies say the vehicle went into the median again, this time hitting a tree. The vehicle caught fire.

Deputies say the driver was Robert A. Sciarrone, 27, of Webster. The sheriff’s office says the deputy put Sciarrone in the back of the patrol car, then went to the flaming vehicle to see if there was anyone else inside.

The sheriff’s office said there was no one else inside the crashed vehicle, but while the deputy was checking, Sciarrone slid the partition in the patrol car and managed to maneuver through the small opening and into the driver’s seat, stealing the patrol car.

Deputies then pursued the stolen patrol car. Livingston County Sheriff Thomas Dougherty said he was driving “one hundred and fifty plus miles per hour”.

The sheriff’s office said Sciarrone tried to take Exit 7 off of I-390 but crashed. After a short chase, deputies say they took him into custody.
Sciarrone was taken to Strong Memorial Hospital with injuries.

Sciarrone was arraigned at the Livingston County Jail and released on his own recognizance, as his charges did not qualify for bail under the NYS Justice Reform Act.