EAST ROCHESTER, N.Y. (WHEC) — An East Rochester boy is aiming to set a world record, and he plans to do it all on a swing.

News10NBC’s reporter Jenny Ly met with Sean Lewis, who, since 7 a.m. Thursday, is taking a shot at becoming the next Guinness World Record holder.

“The first segment was super good. I felt super good, and I feel good now,” said 12-year-old Sean Lewis, who is swinging for a chance at a record.

“I wasn’t that nervous until yesterday, it started to hit me how long 30 hours actually is, and I have to stay up throughout all the night,” Sean said.

Surrounded by friends, family, neighbors and pets cheering him on, Lewis is aiming to set the world record, all from a swing his dad, Matt Lewis, built for him nearly 10 years ago. 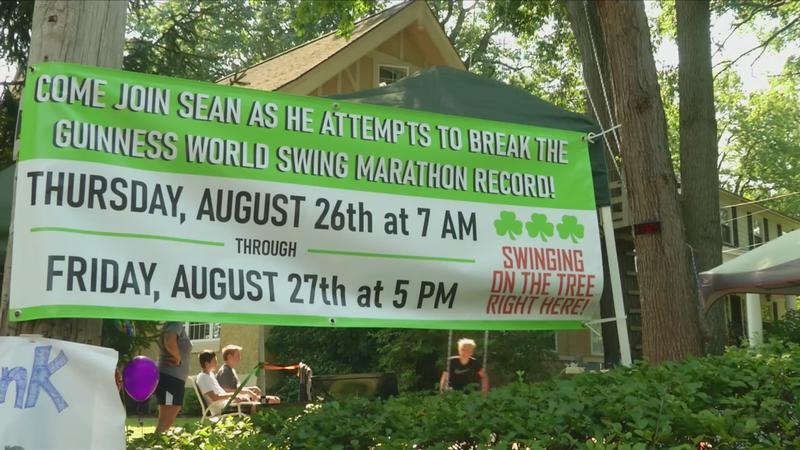 “I put the swing up years ago and he just took to it. He loved it, he’s always out here swinging. I think he just wondered, ‘Is there a record?’ And when he looked it up and saw there was, he thought maybe he had a shot at it,” Matt said.

“The community has been super supportive, they’ve been honking, coming out, volunteering and showing their support. East Rochester is a great town for that,” Matt said.

“I have a tent that I’m going to set up and just sit up here,” said Dominic Romach, a friend of the 12-year-old. “I brought him some drinks and candy, some energy drinks to help him stay up.”

The rules to world swinging domination are simple: Sean needs two witnesses at all times, it needs to be filmed, no one is allowed to push him and he needs to be swinging nonstop.

“It’s just going become a mental game like he knows he can swing, but can you do it over and over for four hours at a time,” Matt said.

Breaks are allowed, and Sean gets 20 minutes every four hours. However, once that break is over, Sean is back in full swing.

“I’ll be super proud of him. I think it will just be a great feeling of accomplishment. He’ll probably just want to go to sleep pretty soon after,” Matt said.

In order for Sean to beat the Guinness World Record of 32 hours, 2 minutes and 3 seconds, his goal is to swing until 5 p.m. Friday, Aug. 27. To help him get through these critical hours, Sean plans on wearing padded bike shorts.