ROCHESTER, N.Y. (WHEC) — A chorus of applause resonated through Lowry Hall at the Eastman School of Music Friday morning, as students, faculty, school leaders, and state and local lawmakers gathered to celebrate the centennial of the esteemed institution.

"This is a facility that serves not just our community,” said University of Rochester President Sarah Mangelsdorf. “We have performers, local performers, and performers who come from all over the world, and people come to hear them, it’s really just such a gem.”

Since 1922, Eastman has been consistently ranked one of the top music schools in the United States. It opened its doors to the public a century ago this week, and since then it has earned a reputation as a dream school for the best young musicians from around the world.

"I’ve been wanting to come to Eastman since I was 15,” said Mason St. Pierre, who is studying conducting and led a live music ensemble during Friday’s centennial event. “To be finishing my terminal degree here at a dream school is quite an honor.” 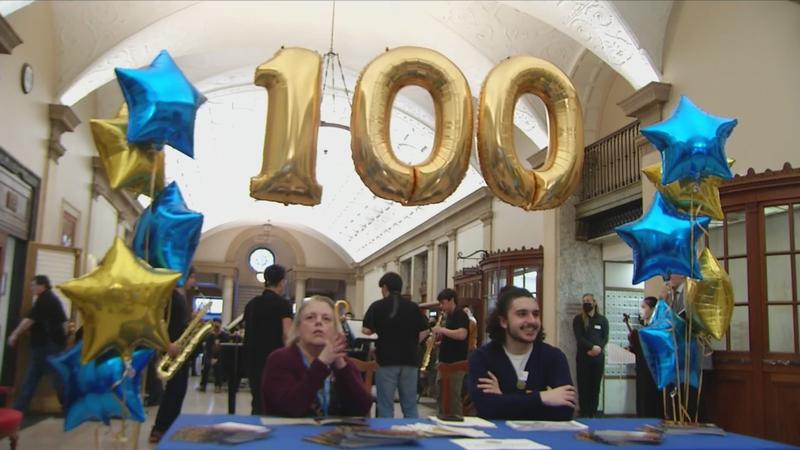 The institution also serves and an academic and musical home for many local musicians, like Bella Lau from Mendon, who is a member of the centennial graduating class.

"I was a part of the Eastman Community Music School since 2011, so I’ve been around Eastman for a long time, and to be part of the centennial so closely, has been really special," Lau said.

Excellence in music is clearly the school’s forte, but access to world-class performances isn’t the only benefit of having a top conservatory in the heart of Downtown Rochester. Mayor Evans pointed out the positive economic impact of the school attracting new people to the city. On top of the economic and cultural contributions to Rochester, the school also has special personal meaning for many.

"I didn’t really realize how special it was until I came here and met so many great people from all around the country and other countries,” Lau said.

Innovation and the arts are part of Rochester’s DNA, and Eastman’s Joan and Martin Messinger Dean Jamal Rossi hopes the next century will see them working together in harmony.

"There’s no doubt we’re going to see increasing influence of technology on music, and that’s exciting,” said Rossi. “But I hope 100 years from now, people will still come in-person to Kodak Hall at Eastman Theatre and Kilbourn Hall and sit and just experience the joy of live music-making."

For more information on the school’s centennial events, concerts, and campaign, click here.