ROCHESTER, N.Y. (WHEC) — Gov. Kathy Hochul Wednesday unveiled a package of several new gun control executive orders and bills that she says is a direct response to the mass shooting that happened in a Buffalo Tops on Saturday.

One of her executive orders signed Wednesday will require State Police to file for an Extreme Risk Protection Order under New York State’s Red Flag Law whenever they have probable cause to believe that an individual is a threat to themselves or others.

Hochul is also pushing for the Legislature to pass a bill that would require semiautomatic pistols manufactured or delivered to licensed dealers in New York to be microstamping-enabled. Microstamping marks bullets and cartridge cases with a unique fingerprint each time a gun is shot so that when they are recovered, police can link them to a specific gun, a bill that would widen the legal definition of a firearm to close what she called the "other gun" loophole, and a bill that would require all law enforcement agencies to report the recovery of any crime gun within 24 hours.

Hochul also issued a referral to the Office of the Attorney General to investigate and study the social media platforms that were utilized by the Buffalo shooting suspect "to broadcast, promote, and facilitate violence, espouse hate, and legitimize replacement theory". 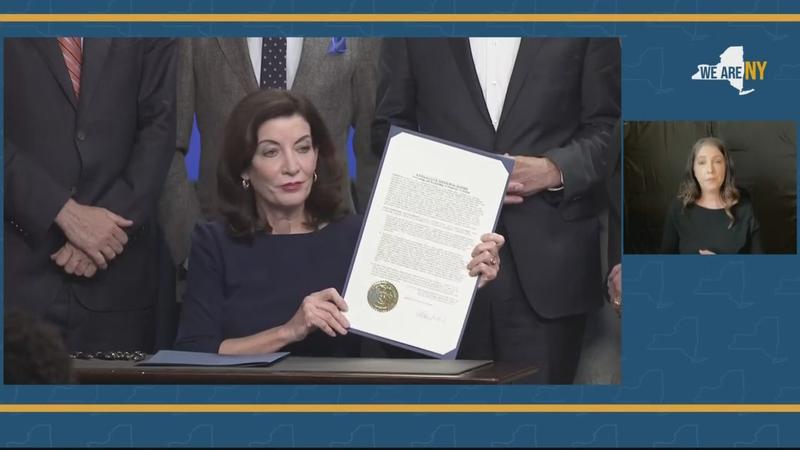 The other executive order calls on the Division of Homeland Security and Emergency Services to establish a new unit within the Division’s Office of Counter Terrorism dedicated solely to the prevention of domestic terrorism. That unit will be tasked with disbursing funds to localities to create and operate threat assessment management teams and utilizing social media to intervene in the "radicalization process". It also calls on New York State Police to establish a dedicated unit within the New York State Intelligence Center to track what Hochul calls domestic violent extremism through social media.

"You can’t act on the evil thoughts that possessed your mind and the hatred that fills your heart if you don’t have access to weapons," Hochul said. "That’s the intersection of two crises right now, that are unfolding in our country. The mainstreaming of hate speech, racism, nationalism, white supremacy and the easy access to military-style weapons and magazines."

This comes on the same day that New York Attorney General Letitia James announced that her office is launching an investigation into Twitch, 4chan, 8chan, Discord and other social media companies.

Watch the full press conference in the video in the player below (mobile users, click here):