ROCHESTER, N.Y. (WHEC) — A rumor going around on social media has been raising some eyebrows. The claim is a local school district is putting litter boxes in bathrooms for students who identify as cats, sometimes known as "furries".

News10NBC’s Nikki Rudd is checking the facts after we received several emails about this claim, which has been making the rounds on social media.

"Don’t say where you heard it. Dansville Central School has put a litter box in the bathroom. A couple of students identify as cats and demanded a litter box. This world is nuts, and this is not a rumor."

Rudd reached out to Dansville Superintendent Dr. Paul Alioto. He said that rumor is false. 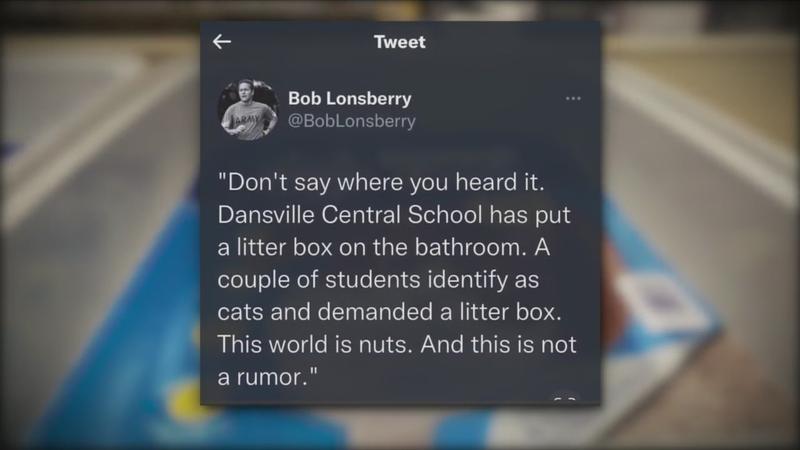 "We are aware of rumors and false social media posts about the District placing kitty litter in bathrooms for students who identify as animals," Alioto said. "We have no students who have claimed such identifications other than those who call themselves Mustangs. We have not placed kitty litter boxes or stables in any of our facilities."

In case you’re wondering, Dansville is "Home of the Mustangs," their mascot.

This rumor isn’t just spreading around here. It’s happening in other parts of the country with talk of "furries" in schools. What is a furry? Furries are fans of anthropomorphic characters. Animals with human characteristics. Furries dress up as that animal and have their own "fursona".

Rudd also heard this claim being made about Perry and Geneseo schools.

"This is a rumor and untrue," said Geneseo Central School District Superintendent Cindy Flowers. "Geneseo does not have litter boxes in restrooms, nor have we received this request."

Perry Superintendent Daryl McLaughlin said, "There is no truth to this."

Dr. Alioto did tell Rudd Dansville Central Schools has an awesome therapy dog program. He says the therapy dogs are frequently walked outside, and they clean up after them diligently.