Fact Check: Is a bill that could lead to COVID ‘concentration camps’ up for a vote?

ROCHESTER, N.Y. (WHEC) — It’s a post being shared all over social media. Several viewers alerted us about it. It’s a bill in the New York State Assembly that some claim would pave the way for COVID concentration camps. Is there any truth to this? News10NBC’s Nikki Rudd is checking the facts.

Here’s the screengrab that was shared with us:

Have you seen this picture on social media and wondered if it’s true? @whec_nrudd is checking the facts on News10NBC at 11. pic.twitter.com/6kV3YgxY24

When I started looking into it, I noticed even a Rochester City Council member had shared it.

According to the post, the New York State Senate and Assembly will vote on a bill on Jan. 5, 2022. If passed, it would allow the governor of New York, his or her delegates – including but not limited to the commissioner and heads of local health departments – the right to remove and detain "cases, contacts, carriers or anyone suspected of presenting a significant threat to public health."

Anyone can type something up and post it online. So next, I looked up the bill on the New York State website. To my surprise, there it was: Assembly Bill A416. 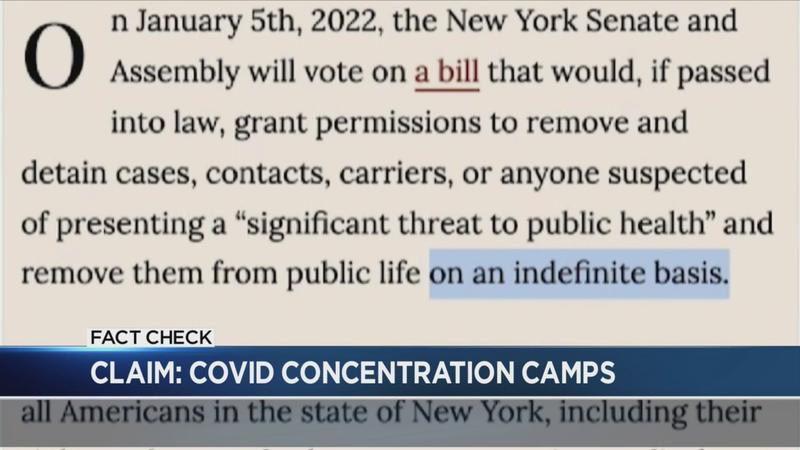 The bill was initially introduced in 2015 by downstate Assemblyman Nick Perry (D, 58) and re-introduced in every session since. You can read it for yourself. It talks about removing and detaining people who are a threat to public health.

Here’s the first portion of the bill:

Section 1. The public health law is amended by adding a new section 2120-a to read as follows:

§ 2120-A. REMOVAL AND DETENTION OF CASES, CONTACTS AND CARRIERS WHO ARE OR MAY BE A DANGER TO PUBLIC HEALTH; OTHER ORDERS. 1. THE PROVISIONS OF THIS SECTION SHALL BE UTILIZED IN THE EVENT THAT THE GOVERNOR DECLARES A STATE OF HEALTH EMERGENCY DUE TO AN EPIDEMIC OF ANY COMMUNICABLE DISEASE.

My next step was to reach out to Assemblyman Perry’s office.

"Conspiracy theorists and those who spread misinformation online are once again trolling on social media, posting concocted stories about A.416," Perry said.

Here’s some background on the bill. Assemblyman Perry’s Communications Director Frank Shea said the bill was introduced to address public health concerns involving people infected with Ebola who had entered the United States.

Shea says, "Local governments had no mechanism in place to address the individual’s refusal to quarantine, even though she was exposed to a very deadly virus. Bear in mind also that the Ebola virus raged through many African countries before it was contained, and meant almost near-certain death to anyone who contracted the virus (death rate of up to 90% in humans-World Health Organization)."

"There is no intent, no plan, or provisions in the bill to take away, or violate any rights, or liberties that all Americans are entitled to under our constitution, either state or federal. A proper reading of the bill would find that significant attention was paid to protect individual rights which could be affected by exercising the authority granted in this bill," added Shea.

He says the bill has been grossly misrepresented online even though some provisions in this bill may be applicable to the current COVID-19 pandemic.

That has prompted Assemblyman Perry to take action.

"To deprive these individuals the ability to use this issue for fuel to spread their fire of lies and mistruths, I will take the appropriate legislative action to strike the bill, remove it from the calendar, thus ending all consideration, and actions that could lead to passage into law," Perry said.

So when it comes to the claim that the State Assembly and Senate will vote on a bill in January that would pave the way for COVID concentration camps in New York, that is false.