ROCHESTER, N.Y. (WHEC) — You see an ad on social media claiming you can make $200 just for sharing your opinion! A viewer sent us a screengrab of the advertisement. With all the scams we report on, my initial thought was it’s not legit, but you might be surprised at what I found out.

That’s the headline our viewer saw in an ad on Facebook. It says it’s "Sponsored by Wilkins Research Services, LLC."

According to the post, you just had to watch a presentation about community topics on your computer over a seven-hour period, share your opinion via webcam and you’d get $200 within 10 business days.

The first thing I did was Google the company: Wilkins Research Services. 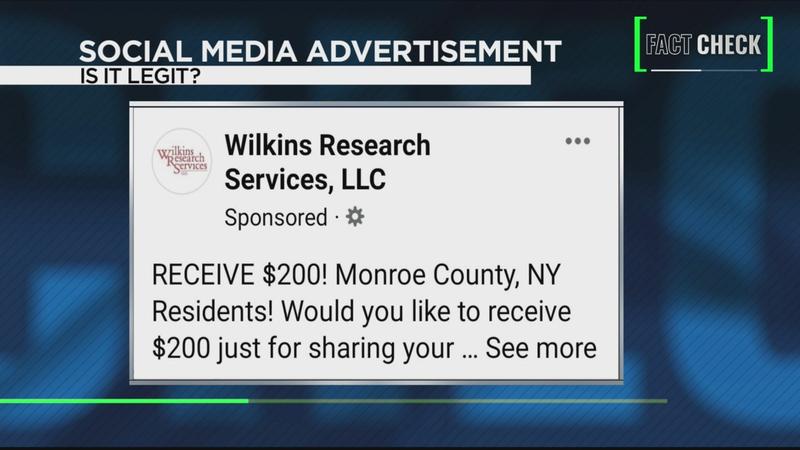 On the front page, it reads, "Market Research Done Right!" It looks legit, but anyone can create a website, right?

So next, I looked it up on the Better Business Bureau’s website. It has an A+ rating. The company is based in Chattanooga, Tennessee. So I contacted the BBB rep there.

"The company has been established in our area for quite some time," said BBB President for Southeast Tennessee and Northwest Georgia Michele Mason.

She says Wilkins Research Services has been around since the early 1970s.

"They’ve actually been accredited by our Better Business Bureau for almost 50 years. So we’re very familiar with the organization," said Mason. "In our three-year reporting period, we’ve just had two complaints and in both cases, the company did resolve those."

Mason said thousands of people reach out to the BBB about Wilkins Research Services every year because of the type of services it offers and how it reaches out to people.

"We are really glad that the consumer is checking that out because no matter who it is, you want to make sure that you are doing business with a reliable and trustworthy company," Mason said.

So if you saw the ad on social and thought it was a scam, Mason says that is false.

I checked to see if there are any other studies or focus groups being offered by Wilkins Research Services for people in our area.

According to its website, they have enough people from our location, but you can always check back at a later time. You can also email contact@wilkinssurvey.com.