CANANDAIGUA, N.Y. (WHEC) — An armored vehicle has been spotted in Ontario County. A viewer recently emailed us about it. He had some questions about what it is and who paid for it. He heard it cost more than $200,000. 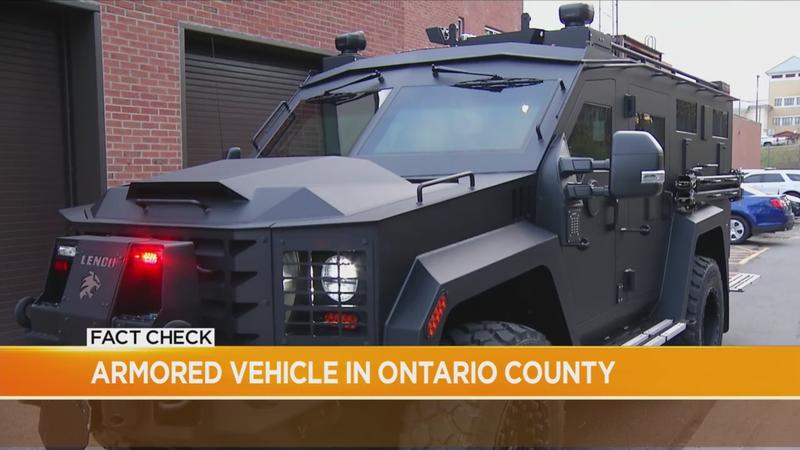 This thing can go through 29 inches of water and withstand 200-mile per hour winds.

"It’s been a long haul to get something like this, and it’ll get used, unfortunately," Deputy Colburn said.

I asked Lt. Green how it was paid for.

"It’s from the Department of Homeland Security. It’s a state grant. That was two years of the grant," he explained.

Already it’s been put to use. In the past, the OCSO had to borrow SWAT vehicles from Rochester, Monroe County or the FBI.

"For us, it’s a peace of mind knowing that we have the piece of equipment if we had an incident," Lt. Green said.

We should note, it’s not just for law enforcement or an active shooter situation. Deputy Colburn said it can also be used to rescue people in flooding situations.

"We’ll drive right up to the house and put the people in and drive them out," Deputy Colburn said. "It’s generally public safety. It isn’t just police. It’s a piece of equipment that can be used for everybody."

So when it comes to the claim that the OCSO bought an armored vehicle that is a fact.