ROCHESTER, N.Y. (WHEC) — We’ve been getting a lot of emails from viewers about this story. It involves Gov. Kathy Hochul, the New York State Department of Health (NYSDOH) and "quarantine camps."

You might remember News10NBC’s Nikki Rudd did a Fact Check on an Assembly bill about this back in December. That bill talks about removing and detaining people who are a threat to public health. It was introduced to address public health concerns involving people infected with Ebola who had entered the United States. The bill was eventually stricken and removed from the calendar.

Now some claim Governor Hochul and the NYSDOH are trying to bypass the legislative process and give themselves the power to create COVID-19 camps.

Viewers have been emailing us asking, "Why aren’t you covering this story?" 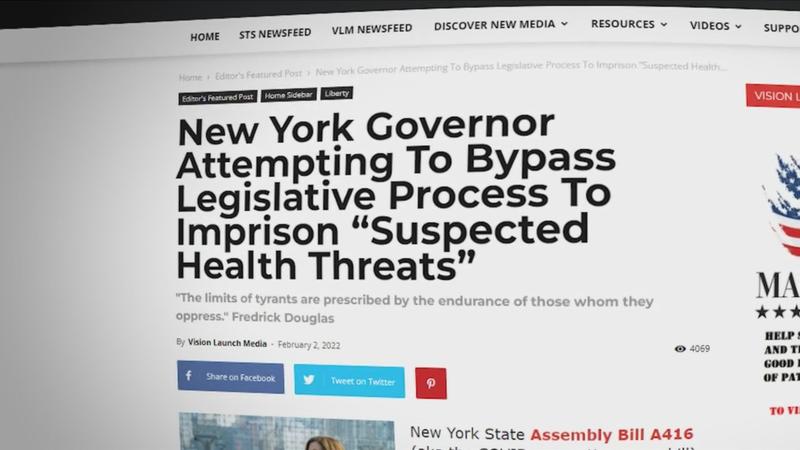 One viewer wrote, "Why isn’t any local news In the entire state covering this? The Governor is bypassing the legislature and amending the current health code to breakup families and put them in internment camps if they are suspected of any virus. So, she can take your husband and kids if she, or anyone at the DOH, perceives them as an infectious threat."

"Right now there’s a there’s a lot of information out there. Some accurate. Some inaccurate," said Assemblyman Josh Jensen (R, 134).

He represents many of you in Monroe County and sits on the State Assembly Health Committee. Jensen makes it clear, the NYSDOH proposals do not involve any sort of quarantine camps.

"That’s not what’s being proposed," said Jensen. "What the Department of Health is trying to do is extend isolation quarantine guidelines that have been in effect since March of 2020."

Those guidelines would allow the NYSDOH to keep people who are COVID positive away from those who are not. There’s also a proposal that would empower the NYSDOH and New York State Department of Education to implement mask mandates, and another proposal to mandate the vaccine for health care workers.

"These would not be laws," explained Jensen. "These would be Department of Health regulations."

And that’s where Jensen has a problem.

"I thoroughly believe that these regulations are trying to bypass the New York State Legislature," Jensen said.

Jensen, along with a whole group of members in the Assembly Minority, say this policy would essentially return emergency COVID powers to the governor for as long as she wants. Click here to see the letter they sent to Governor Hochul, the NYSDOH Commissioner and the NYSED Commissioner.

Jensen believes these proposed regulations should come before the state legislature and be debated.

"I think it’s important why we have to have these conversations out loud, in public, in daylight because this affects a lot of people’s lives," Jensen said.

Here’s the response from the NYSDOH Director of Communications Jill Montag:

"The DOH filed a notice of proposed rulemaking, which initiates a 60-day public comment period. The proposed rule change relates to the ability of the commissioner of health to take certain limited actions to protect the public from COVID-19. The ultimate decision as to whether or not to adopt this change permanently will be made after public comment has ended and we have had a chance to assess those comments."

Again, there are no plans for quarantine or COVID camps. Jensen and NYSDOH officials both say there is zero truth to that claim. However, Republicans, like Jensen, believe these regulations do bypass the state legislature.

If you have questions or comments on the proposals here’s who you can contact: