ROCHESTER, N.Y. (WHEC) — Parents and school leaders are cheering over Gov. Kathy Hochul’s plan to lift mask mandates, and hoping it will soon cover schools too.

Wednesday the governor announced that the state’s indoor mask mandate will end Thursday for most public places, but not for some facilities, including schools.

“Doctors, nurses, medical people, wear them every day all day,” said Meghan Glaser, mother of a Fairport 9th grader. “Certainly, I’d rather not. But, while it’s the safest and best, I’m in favor of that.”

Glaser said she hopes for an "exit strategy" from masks in schools but, as a Monroe Community College teacher, she also understands if students are left out for now as Gov. Hochul ends the mask mandate for most public places like businesses.

"It sounds like schools are a different story,” she granted. “So I am in favor of taking our time, being led by the science, and making sure you make the right call for our kiddos.” 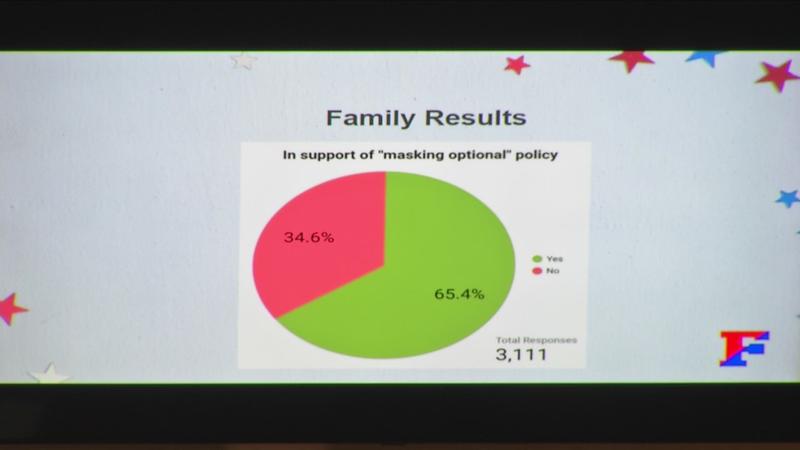 "The numbers have just been dropping. So, I think it’s awesome,” exclaimed Fairport School Board member Brian Mortiz, during a Wednesday night workshop specifically dedicated to the mask policy.

At the workshop, the board marked substantial progress on how many students are testing positive for COVID.

In a recent survey, strong majorities, more than 60%, of the district’s parents and employees support making masks optional.

The governor’s announcement lifts the mask mandate for public places but not prisons, state nursing homes, daycares and schools, with an eye towards maybe changing that after spring break.

"After the break, after we’ve had kids tested, we are going to make an assessment, that first week in March,” the governor said during her Wednesday announcement.

"I believe our kids going to school, the mandate that affects them should be stopped immediately,” declared Mark Moretter, a Fairport school district grandparent. “It should never have been in effect.”

Plenty of local parents say they want masks gone immediately, but Fairport officials say, first, they hope to win over the minority of hesitant parents who seem willing to forego masks if, in the next few weeks, the community takes more steps to fight COVID without them. The Fairport School District’s survey found several conditions under which those who oppose making masks optional might change their minds.

“If KN-95 masks were available, if vaccination rates continue to increase, if we have access to testing and testing clinics,” ticked off superintendent Brett Provenzano, ”with those factors in place.”

One expression that kept coming up in mask discussions was "off-ramp" or "exit strategy" which school systems have been begging the governor for.

They say Wednesday’s moves provide "some" clarity and guidance and they’re hoping for more.