FAIRPORT, N.Y. (WHEC) — He was one of the most well-known WWII veterans in our area and on Monday, combat medic Peter DuPre, known locally as “Harmonica Pete,” was honored in the town he called home.

“I will be honest with you, his absence here today is glaring but I also feel like wherever he is now, he is watching and waiting to play us all a tune,” said Mike Cialini, the Commander of VFW Post 8495.

Peter DuPre who is lovingly known as Harmonica Pete died in January at the age of 98, “he was a fixture in our town and in our village, he was known by many and known to many more,” Cialini added.

DuPre loved the annual Fairport parade and ceremony. Even when his music career took off and he was called upon to play the national anthem at national sporting events, he would always make sure he was back home in time. 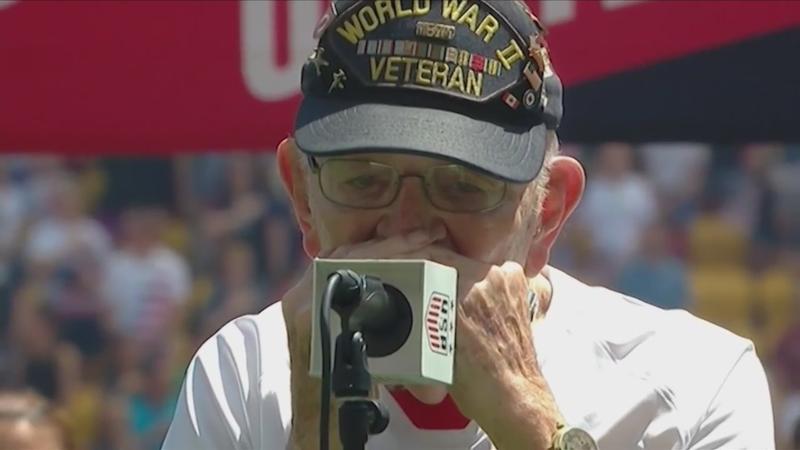 “When he did the U.S. Women’s Soccer game, he was like ‘well, wait a minute that’s Memorial Day weekend, what day is it and when is the parade,’ because he just wanted to be in those convertibles, he loved cars and he couldn’t wait to see what car he was going to get,” recalls his daughter Mary Ann.

A young scout carried the World War II medic’s photograph behind one of those cars on Monday. DuPre’s wheelchair and hat were placed on the memorial with his fellow comrades looking on as his name was read along with the other veterans who passed away this year.

While losing their father has been hard, Harmonica Pete’s kids say Monday’s events help bring them some peace.

"It makes me proud to have been his daughter of course, and just to know that everything he aimed at being as a person, it obviously worked, he would love to…we’ll, I’m sure he’s looking down thinking, alright I did it right, ya know,” Mary Ann says.

And in true Pete fashion, he’d want to make sure his fellow soldiers were recognized too.

“Today, in his absence we honor, we remember and we reflect not only on the life of Harmonica Pete DuPre but of all those veterans we have lost over the past year. We do not need to know them to honor their service, their strength, and their sacrifice,” Cialini added.