ROCHESTER, N.Y. (WHEC) — Has someone been collecting unemployment benefits in your name? You might think it’s an odd question but thousands of people in our region are finding out the hard way they’ve been the victim of identity theft and now, at tax time, they’re stuck cleaning up the mess.

At the start of the pandemic when the economy was shut down, unemployment claims were coming in fast and furious. New York State’s unemployment website was constantly crashing, the phone lines were crushed and those in need were made to wait weeks if not months for the benefits they were entitled to.

News10NBC Investigative Reporter Jennifer Lewke asked Gov. Andrew Cuomo directly on a number of occasions what was being done to help those who couldn’t get through to check on the status of their claims. In May 2020, during one of his briefings, the governor said the state needed to do the proper checks and balances to ensure those applying were actually entitled to the benefits because if not, reporters would be back with a different set of questions.

“Why didn’t you check to make sure John Smith was eligible before you gave him taxpayer money (you’ll ask)… and that’s going to be a fair question. Then we’re going to say, well, we were in a mad scramble to move as quickly as possible and you’ll say… well, you were supposed to be able to determine the eligibility of a person and you let this person get taxpayer money and you were a bad governor that’s why you can’t win in this business,” he said.

It didn’t take long to see thousands of fraudsters were hiding in the crowd and the state certainly wasn’t or isn’t catching all of them—even with the extra time the governor said was needed for that accountability. In June, News10NBC started hearing from local teachers who never applied for unemployment but were receiving determination letters and cash cards with benefits on them. Eight months later, it’s still happening. 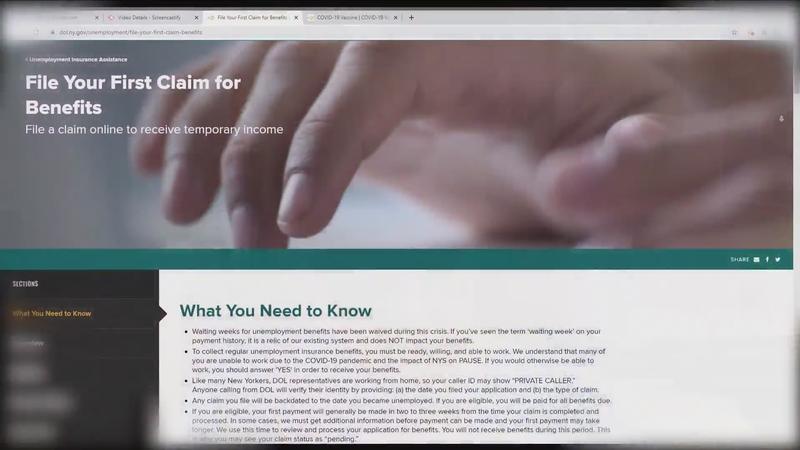 Bonnie Slack got a debit card in the mail a few weeks ago.

“I haven’t worked in almost 15 years so at first, I thought this is silly, someone made a really huge mistake here,” she told News10NBC.

She figured she should look further into it and after several calls to the New York State Department of Labor, she was finally able to get through to someone who told her the first thing she needed to do was file a police report,

“The policeman that visited us said it’s huge, it’s all over,” Slack said.

In the past few weeks, Ogden and Brighton police have fielded dozens of similar calls.

Lu Yusko got a determination letter in the mail too but she can’t get through to anyone at NYSDOL to start the process of disputing the claim.

“They want you to enter a PIN number and you’re like okay well, who knows what the PIN number was that these people created,” she told News10NBC.

Brenda Kavanough only found out her identity was stolen over the summer when she went to file for benefits herself after she was furloughed from her job for a week.

“They said, someone is using your social security number to draw unemployment and it looks like they’ve gotten 13 weeks,” she recalled.

Kavanough spent months trying to prove she didn’t make the claim and thought it was finally cleared up, then she got a 1099 tax form.

“$12,643 that I had received in unemployment compensation and I went oh my gosh, how do I deal with this,” she said.

So, not only did a scammer collect money in her name, he didn’t pay taxes on it. Kavanough worries others many unknowingly be in the same boat.

“Is there a 1099 out there with their name on it that they don’t even know exists?” Kavanough said.

The New York State Department of Labor recently put out a press release, patting itself on the back for stopping 425,000 fraudulent unemployment claims worth $5.5 billion. What the department didn’t say was how much money has made it out the door and into the hands of scammers, how many fraudulent claims it didn’t catch in time.

News10NBC Investigative Reporter Jennifer Lewke requested an interview with the Commissioner of the Department of Labor. The request was ignored, instead, a spokeswoman for DOL responded to emailed questions with the answers below:

-How many claims have been identified as fraud only AFTER money went out the door?
Again, the number is fluid as it changes daily as new fraudulent claims are being identified.

-How much money does the state believe has been paid to fraudsters? What mechanisms are in place to recover it?
• Again, we cannot give you a specific number as new fraud is being identified every day AND we continue to work with financial institutions and law enforcement partners to recover more and more of the funds that were paid to fraudsters. These recoveries can take months, but we are committed to clawing back as much money as we can.
• As we have told you previously, we aren’t able to talk about the specifics of the investigations process or give details about cases, as it may provide a roadmap to fraudsters.
• We continue to partner with local and federal law enforcement, other states, and the Secret Service, among others, to combat unemployment insurance fraud. After cases are referred for prosecution, the state works with law enforcement and prosecutors to hold the criminals accountable.
-Has any money sent out to fraudsters been recovered at this point?
See number 3

– How many questionable claims are currently being investigated by DOL?
Again, I refer you to question number 3.

-Many folks who believe their identities were used to claim benefits are now seeing 1099s showing that money as taxable income, what protocols/communications are in place with the NYS Tax to offer assistance?
• New Yorkers should refer to the guidance provided by the Internal Revenue Service
here: https://www.irs.gov/newsroom/irs-offers-guidance-to-taxpayers-on-identity-theft-involving-unemployment-benefits
• Per this guidance, Taxpayers who receive an incorrect Form 1099-G for unemployment benefits they did not receive should contact the issuing state agency to request a revised Form 1099-G showing they did not receive these benefits. Taxpayers who are unable to obtain a timely, corrected form from states should still file an accurate tax return, reporting only the income they received. A corrected Form 1099-G showing zero unemployment benefits in cases of identity theft will help taxpayers avoid being hit with an unexpected federal tax bill for unreported income.

-Is DOL considering a specialized phone line for those who believe their information was used to file a fraudulent claim? (many tell me they wait hours to try and get through to someone).
• The DOL already has a dedicated fraud hotline in place: 1-888-598-2077.
• However, the quickest way to report fraud is through the portal at: on.ny.gov/uifraud
• When an individual is reporting identity theft and ALSO needs to file their own claim, the claimant must call the NYSDOL’s Telephone Claims Center to speak to a representative. The claim is then forwarded to our Office of Special Investigations which will then take steps to verify the validity of the claim, and also assist the claimant in setting up a new ny.gov account.
• There is a rigorous application and screening process that we are bound by law to follow to determine eligibility and confirm the claimant’s identity, and it is for the protection of the claimant and to protect the lifeline of Unemployment Insurance benefits for all New Yorkers.

When News10NBC Investigative Reporter Jennifer Lewke followed-up on these answers, pressing for more information, reminding DOL that unemployment payments are funded with taxpayer money and the fraud information should be public, she was referred back to the same answers and encouraged to file a Freedom of Information Law (FOIL) request for the information which she will do.

In the meantime, if you feel you are a victim of this scam: