ROCHESTER, N.Y. (WHEC) – The pandemic has kept many families from being able to visit the actual rooms where their loved ones have been living.

In many nursing and assisted living facilities visitation is conducted in community rooms or outside to allow for social distancing when possible. But that has raised concerns from family members who aren’t able to monitor the conditions.

David Hegeman has had a rough go of it medically, “I had a quintuple bypass, that started my journey,” he tells News10NBC, “now I’m in stage 4 renal failure.” Hegeman has lived at Cobbs Hill Manor Assisted Living Facility on Monroe Avenue in Rochester for the past three-and-a-half years.

His sister Kim Corpus picks him up regularly for visits and appointments. A few months ago, Hegeman shared that he’s been having some issues with his roommate, “my brother has been sleeping in the lobby of Cobbs Hill Manor at night, instead of the bed that we’re paying for so that he feels safe,” she tells News10NBC.

Cobbs Hill agreed to a room change, “they said he has to minimize his stuff by Friday, he uses a walker, he can’t lift things, he can’t move things,” Corpus says, so she went to help. “I was informed that I couldn’t go up, per COVID protocols and I said, I’m going up because I’m concerned about his safety…the smell on the room, I’m sorry I’m going to get emotional, the smell in the room was disgusting,” she recalls. 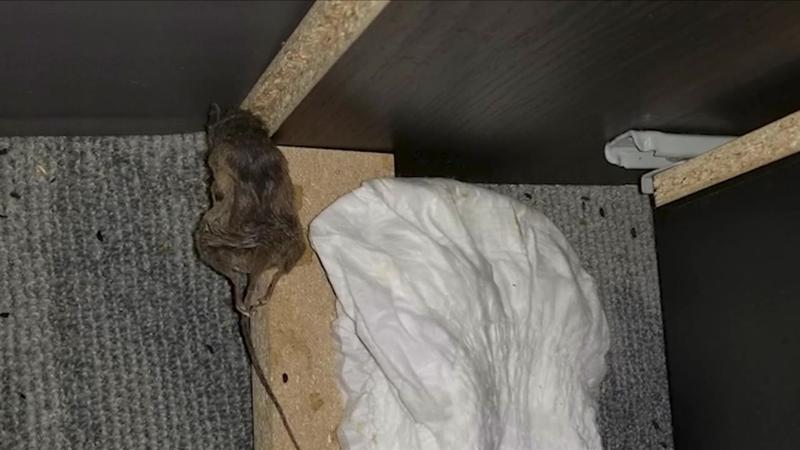 On its website, Cobbs Hill Manor promises weekly housekeeping but when Corpus entered, “dead mice and live mice living in his clothes and next to bed…the number of mouse feces that I started to see, I was like you’ve got to be kidding me and I did get a little heated and I said, this is what you let your residents live in,” she recalls.

She continued to go through his side of the room while an employee watched from the door, “I pulled up a pair of his pants and a live mouse jumped out at me and I screamed and I was very upset, at this point I was like how can I get my brother out of here. I have a home that he can’t come to because I have stairs, he can’t do stairs,” she says.

Hegeman says he has complained to staff on multiple occasions, “we fill out a grievance and… that’s it, it disappears. I’ve seen mice all over the place and their excuse is, “oh the residents don’t tell us about it” and also there’s bed bugs.”

According to NYSDOH inspection records, Cobbs Hill Manor has had 38 violations in the past 4 years ranging from citations for environmental standards, resident services and resident protections.

News10NBC Investigative Reporter Jennifer Lewke spoke with the owner of Cobbs Hill Manor, David Tosetto for an hour on Monday. He refused an on-camera interview but says, the building is in a wooded area so there are sometimes issues with mice but he doesn’t believe there’s an infestation. He’s not sure what happened on the housekeeping side of things but he’s looking into it. Tosetto also says a few times a year, they run into issues with bed bugs but they are typically isolated to a few rooms.

Tosetto says he brings in a company twice a year that uses dogs to track bed bugs in the facility. In light of this situation, he’s scheduled a visit for this week. He says his exterminator is also doing a full evaluation of the building and he is willing to provide the reports from both companies to News10NBC for review once they are complete.

News10NBC has also confirmed that inspectors from the New York State Department of Health were inside the facility on Friday. In a statement, a spokesman for DOH says, “Protecting residents from harm is a top priority. That’s why the Department of Health conducts unannounced surveys and determines if an issue violates regulatory safety standards. We will continue to hold providers accountable for their actions. As this is an ongoing investigation, the Department cannot comment further at this time.”

Corpus would like to move her brother to another facility but spots are very limited in Assisted Living facilities for Medicaid recipients as it is. On top of that, as News10NBC has been reporting, the Finger Lakes region is experiencing critical staffing shortages and many nursing homes and assisted living facilities have had to close their doors to new admissions because they only have enough staff to care for the residents they already have.

To search the inspection records of a nursing home or assisted living facility click here.

To initiate a complaint, New Yorkers should contact the state’s Centralized Complaint Intake directly at 1-866-893-6772, so appropriate action can be taken.