Family relives mass-shooting horror: ‘if they were moving, he shot them’

BUFFALO, N.Y. (WHEC) — The Thomas family was reunited after a trip to the store turned deadly when a racially motivated hate crime resulted in the death of 10 innocent people in Buffalo Saturday.

Some survivors of the shooting said they were nervous to come back to the scene, but wanted to be with their community. News10NBC’s Stephanie Duprey caught up with a family of three who hid inside the store, and are now reliving the terror.

Two of them hid inside a milk fridge—8-year-old Londin Thomas told News10NBC what happened through her eyes. Some of the language used to describe the scene is graphic.

“So like, we all ran to the back the place where the milk freezes at and he was shooting at the milk and then the milk was like leaking through the metal but the bullet didn’t go through the metal. My-my dad was just trying to hide me and then when the police came we all went through the back," said Londin Thomas.

I was able to catch up with Londin Thomas and her family today.
The strongest 8 year old girl, I know.
Listen to her relive the terror of yesterday’s shooting. Both parents, by her side. @news10nbc pic.twitter.com/o8Dh6yL4Lb

While buying cake mix and grill supplies, rounds of gunshots separated a mom and her baby.

"It wasn’t like pop pop pop, it was just a real continuous just flashing of lights and like chaos and I was looking to see where my daughter was and I didn’t know where she was that was the most terrifying moment of my life,“ said Julie Hartwell, Londin’s mother. 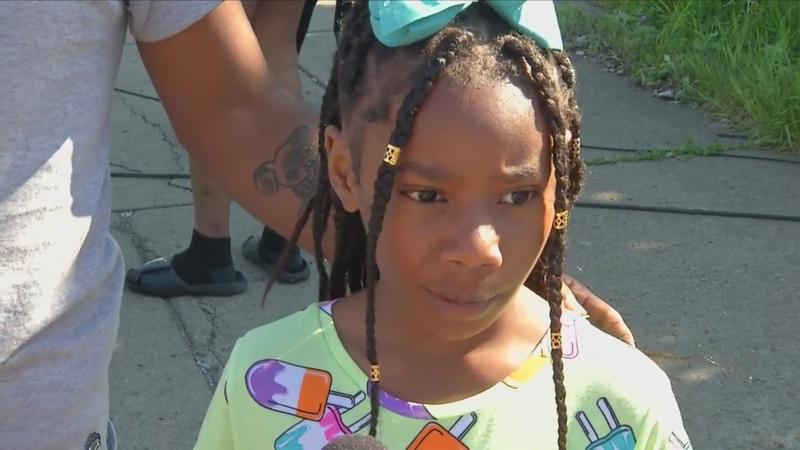 Hartwell says what she saw was so gruesome that it plays over and over in her head.

“I saw dead bodies—if he’s coming back and walking and just looking at people to see if they’re even moving and if they were moving, he shot them."

Hartwell says it’s the community support that is keeping everyone from falling apart. Balloons, flowers, and candles lay across Jefferson Avenue.

The names of the victims were written in chalk on the street. Other community members broke down at the vigil site.

Lea Karnath, who lives nearby said, "It’s really traumatic and I just really feel for the black community and the Buffalo community and this is an absolutely absurd thing to happen it’s a tragic situation it just needs to stop.”

Some community members say they’ll be out here every day to offer support.