ROCHESTER, N.Y. (WHEC) — If you work in the health care industry — from a doctor to a vendor — and claim a religious exemption to the COVID-19 vaccines, you do not have to get a shot until at least Oct. 12.

The order does not apply to all health care industry workers, only those who claim a religious exemption.

Breaking: federal judge extends the temporary ban on the NYS vaccine mandate for health care industry workers claiming a religious exemption until October 12th. Then the order could turn into a preliminary injunction. @news10nbc pic.twitter.com/6XmDrymi5z

Jared Cook is a lawyer at Vahey Law Offices in Rochester.
Cook says an employee must prove they have a sincere religious belief against the covid vaccine.

Brean: "So a person doesn’t have to show up with a letter from their pastor to say, ah see? I get an exception. It’s just a personal thing for that individual that they need, to be honest about?" 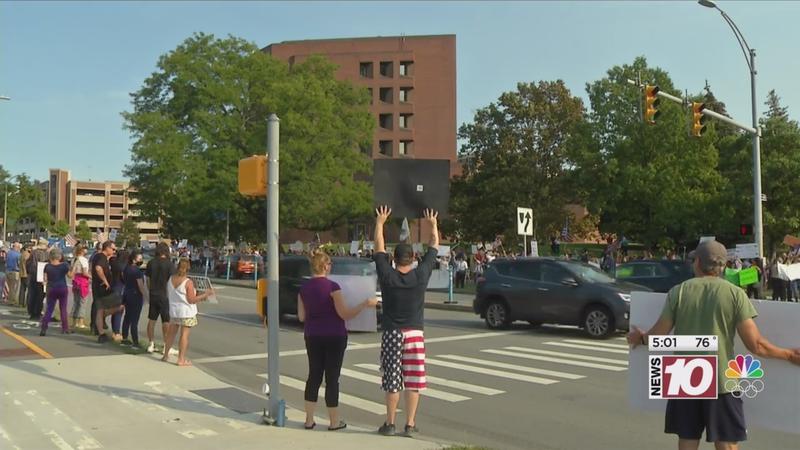 In the lawsuit filed against the vaccine mandate last week, the doctors, nurses, and techs who are suing said taking the covid vaccine would be a "violation of their deeply held religious beliefs" because of the vaccine’s use of "abortion-derived fetal cell lines in testing, development, or production."

Brean: "What is to prevent someone who may not be religious from going to their employer right now and say I have a religious exemption claim to getting the COVID-19 vaccine?"

Jared Cook, Vahey Law Offices: "What’s to prevent them from doing that? I suppose they could try that. But the law doesn’t protect insincere beliefs. It protects sincere religious beliefs and given that the vaccine issue is such a controversial issue right now I suspect that most employers are going to scrutinize these claims very closely and not just say we’re going to let anything go."

The employer can say the exemption would create an undue burden and an unsafe workplace. In that case, the employee can file a complaint with the state division of human rights and eventually sue in the state supreme court.

The court also ordered the in-person hearing scheduled for Tuesday, Sep. 28 is canceled.

On August 26th, New York State ordered health care facilities to have their employees — including contractors and vendors — receive at least their first COVID vaccine shot by September 27th.

According to the lawsuit, they only go by Doctor "A", Nurse "B", Therapist "I."

Four are from Western New York. Sixteen of them are Catholic. One is Baptist. And in their complaint, it says "it would be a violation of their deeply held religious beliefs and moral consciences to take any of the available COVID-19 vaccines given their use of abortion-derived fetal cell lines in testing, development, or production."

One of the lawyers told News10NBC’s Berkeley Brean the temporary restraining order only applies to employees claiming or seeking a religious exemption.

"The New York mandate strips away an employee’s right to apply for a religious exemption in the workplace," Attorney Christopher Ferrara of the Thomas More Society said.

Last week, URMC told us "We are currently developing and adjusting contingency plans based on many variables, including today’s ruling by a federal judge in Utica regarding the vaccine mandate. We will continue planning as a system to maintain high-quality patient care with minimal disruptions as the mandate deadline approaches, and will communicate more extensively as the impact of this ruling and other details become clear."

URMC says 91% of its staff at Strong Hospital is vaccinated. It’s 85% at Rochester Regional Health System.

Attorney Ferrara said California has a religious exemption tied to its vaccine mandate.

The Catholic Church says it is "morally acceptable" to take the COVID-19 vaccines.