Fired RPD chief lawsuit vs city and mayor: ‘I would never lie for anyone’

ROCHESTER, N.Y. (WHEC) — In his lawsuit against the City of Rochester and Mayor Lovely Warren, fired Rochester Police Chief La’Ron Singletary quotes Mayor Warren as saying she would never ask him to lie. But the lawsuit alleges that’s what the mayor asked him to do.

This all stems from the death of Daniel Prude in Rochester Police custody and everything that’s happened since that day in March.

This story is focused on a meeting described in Singletary’s lawsuit between the mayor and the former chief the day before Singletary suddenly announced his retirement. 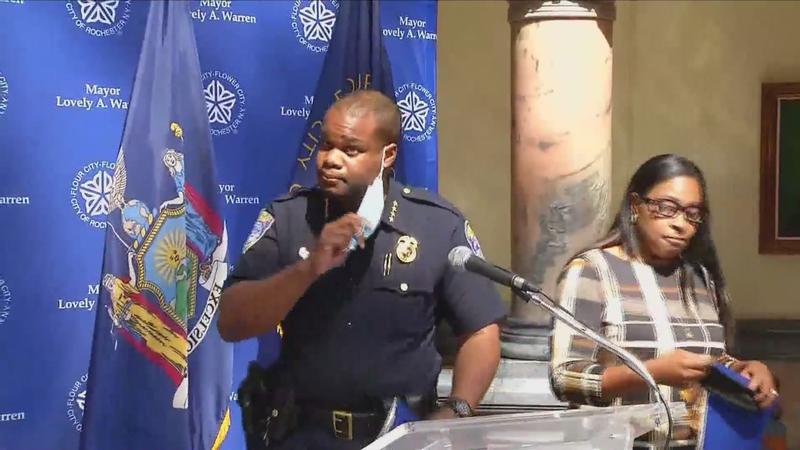 Just moments after this news conference on April 13, two weeks after Daniel Prude died and long before the public knew his name, Singletary’s lawsuit says he and the mayor spoke near an elevator door in the basement of City Hall.

In the claim, Singletary says he told the mayor about the Medical Examiner’s ruling, that Prude’s death was a "homicide."

In an interview with News10NBC’s Lynette Adams on Sept. 15, the day after the mayor fired Singletary, the mayor said the chief’s story is wrong.

Lynette Adams: "So are you telling me you did not know that the medical examiner had ruled this a homicide?"

Mayor Warren: "I had no idea that the ME ruled this a homicide until August the 4th."

After the police video was released in September by Daniel Prude’s family, there were two straight weeks of protests.

The Rochester city council proposed doing its own investigation.

On Sept. 7th, in the claim, Singletary says he met the mayor privately at the home of one of her relatives.

His potential testimony to the council’s investigation was a topic.

In the claim, Singletary quotes the mayor saying she would "never ask me to lie."

But Singletary says when it came to his testimony "the mayor did not want me to mention her knowledge of the police officers’ physical involvement with Daniel Prude" and "asked me to omit the specifics of our conversation when I discussed the details of the medical examiner’s report."

Singletary says the mayor asked him to "instead testify that the medical examiner’s report was mentioned only in passing and to further testify that in hindsight I should not have told the mayor ‘in passing by the elevator.’"

Singletary quotes himself saying "I would never lie for anyone."

The very next day, the mayor had to break the news to the city council that the chief was leaving.

"I do want to inform you the entire Rochester police department command staff has announced their retirement," the mayor said at a scheduled briefing online.

One week later, the mayor fired Singletary which canceled his lifetime health benefits.

That’s one of the reasons he’s suing.

I asked the mayor’s office: Does Mayor Warren want to clarify her answer to Lynette Adams? Does the mayor deny the chief’s allegations?

The reply from Communications Director Justin Roj was no comment beyond the statement issued Wednesday night which does not answer my specific questions but calls the lawsuit frivolous.

"The City administration continues to fully comply with the ongoing review by City Council into the death of Daniel Prude, as it did with the OPI investigation that found no wrongdoing," city spokeswoman Bridgette Burch White wrote in the statement. "As for the Notice of Claim, it confirms the fact that Mayor Warren was never shown the body worn camera footage of the incident by former chief Singletary. It also confirms that Mayor Warren first saw the video on August 4th when it was provided by Corporation Counsel, a fact that Mr. Singletary refused to acknowledge until now. The City will fully defend taxpayers against this frivolous suit."
Since the allegations in Singletary’s lawsuit include the city council’s independent investigation, I called, emailed and texted every member of council."

Michael Patterson also did not comment on the former chief’s allegations but when I asked he said "I support the mayor."

Then there is council member Jose Peo.

Jose Peo, City Council member: "Well I know Chief Singletary personally. I believe in his integrity and his moral compass. If he were to have lied it would be completely against his character."

Brean: "So what’s written in that claim, you believe."

Jose Peo: "Well I also believe in the due process of law. So the mayor has her time in court to defend herself."

When I asked if he supports the mayor, Peo admitted he has been critical of the mayor and said she has one more year in her term.

Peo: "I believe what happens in the dark does come to light and it seems like 2020 is showing a bright light on some dark, dark times in our city."

I was not able to reach council members Mary Lupien and Miguel Melendez.

Everyone subpoenaed to testify to the city council investigation has done so, including the mayor, except one person.
La’Ron Singletary.

This week the lawyer leading the investigation, Andrew Celli, asked a judge to compel Singletary to testify. The investigators want to question him the week of Jan. 4.

I asked to speak to La’Ron Singletary and his attorneys. His lawyers said they have no comment.