First Alert: Second half of the weekend will not be as nice as the first half

That means Western New York will lose our dry, sunny weather for the second half of the weekend. In addition, several disturbances will be moving east throughout this first full week of April. These are not large storm systems, but they will have an impact as the week progresses.

Tonight clouds will be on the increase, but it will be dry for the evening. The temperature will fall into the lower 30s. Sunday’s weather will not be as nice as today. Look for mainly cloudy skies with the chance of a passing rain or wet snow shower. There could be an accumulation of just a coating of snow in the higher elevations south of Rochester. Most of the day will be spent in the upper 30s with a high temperature near 41 degrees. Monday will bring a few breaks of sunshine and it should be mainly dry with a high temperature in the upper 40s. Tuesday once again looks dry and mainly cloudy, but it will turn noticeably milder for the afternoon. The high temperature in the low to middle 50s.

The next storm will be gathering strength in the upper great lakes and will eventually move east towards Western New York. However, before that happens it will turn even milder by Wednesday. There could be a few scattered hit or miss showers for the day. But it will turn breezy and mild again with the high temperature in the middle to upper 50s. Then it turns cooler with passing showers for later Thursday, Friday and Saturday as the mercury falls from the 50s into the 40s for the upcoming weekend. 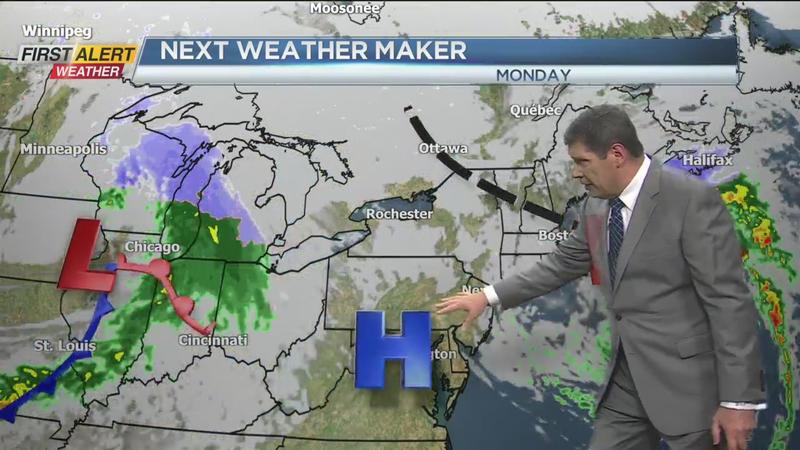