First Alert Weather: A break from the snow, but not the cold 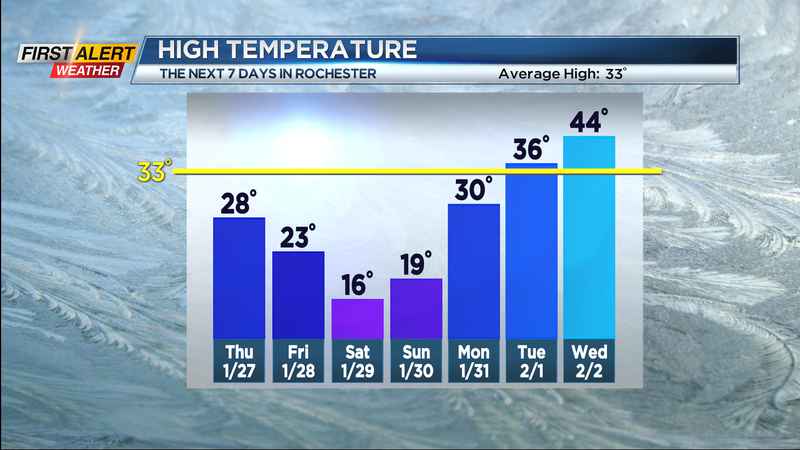 ROCHESTER, N.Y. (WHEC) — We saw another active day over Lake Ontario, with tea kettle snow developing under the influence of light winds, allowing a narrow band of lake snow to develop just offshore.

The western tail of this developed a little spin, called a meso low, and dropped some fluffy lake snow over Rochester. A more impressive swirl dumped heavier snow on the western end of Lake Ontario in Ontario, Canada. All of this pushes north as the winds slowly turn out of the south tonight. This will also help to clear our skies out, and allow temperatures to briefly drop toward or just below freezing away from Lake Ontario. The wind will increase just enough to stop our temperatures from tumbling too much overnight, and may actually rise a bit by morning. Thursday will feature morning sun, giving way to afternoon clouds ahead of our next cold front.

Temperatures will briefly make their way into the mid and upper 20s, before dropping back into the teens on Friday. We’ll see a burst of snow with the cold front, arriving around midnight on Thursday, then becoming more scattered with some lake effect snow on Friday. In all, amounts will be unimpressive, with less than an inch or two total for the majority of the area.

Weekend Nor’easter misses WNY: We’ve been talking about an impressive Nor’easter this weekend, and it is still in the forecast. But, it will be well east of our area. Blizzard conditions are possible in parts of New England, including Boston. We’ll see some lake flakes compliments of a northeasterly wind Saturday morning, but sinking air on the backside of the system will actually bring plenty of sun to western New York and the Finger Lakes Saturday afternoon. The biggest impact we’ll feel locally is another punch of Arctic air, with temperatures holding in the teens both Saturday and Sunday for highs.

If you’re looking for a break from the cold, it is in sight! We’ll likely climb into the 30s by the middle of next week, with highs in the 40s, maybe flirting with 50 by Thursday of next week. In fact, it’ll be mild enough to see rain showers later next week. This initial batch of warmth won’t last long, though. We’ll likely see some more snow as temperatures tumbling by next Friday.